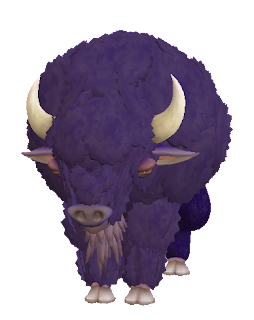 
Except for the matted violet fur, the massive bulos look amazingly like their Ancient bison ancestors.  They are foul-tempered, territorial, 7-foot-at-the-shoulder beasts that roam the plains of the Mutant Future, and fear little from predators.

Bulos favor Charging when head-butting, which leads to a cascade of misfortune for the target.  A successful Charge does double the normal damage, and knocks the victim prone (causing them to suffer a -2 To Hit during their next attack round)...which then grants the bulo a follow-up Trample at +4 To Hit for 5d6 damage.  And, perhaps most devastating effect of all, the victim's possessions risk being damaged or destroyed:  75% for fragile items, 50% for Ancient artifacts (including weapons and armor), and 30% for "standard" weapons and armor.  [The Mutant Lord should modify the item specifics, and overall chances, as they see fit.]

In addition to their thick skulls and muscular frames, bulos are able to absorb damage from physical blows or injuries (their Accumulated Resistance).  And they possess the freakish ability to transform into one of 3 flying insect-like creatures:  a blaash (a radioactive moth), a blight (a light-manipulating, bat-winged worm), or a cal-then (a metal-rending beetle). 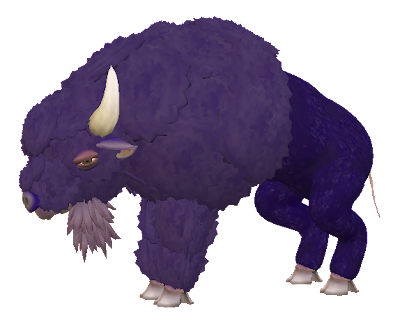 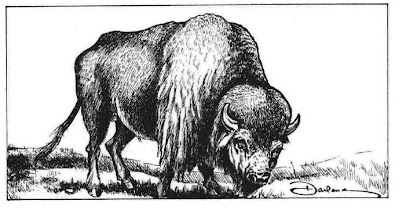 Not-The-Designer's Notes:  The Bulo appeared in 1982's Famine In Far-Go, which was designed by Michael Price, and developed by Price and Michael J. Richie.  Illustration provided by the enigmatic Darlene.