That's the simple descriptor I gave Mr. Tim of No Signal! for a nasty-tempered and obnoxious robodroid in his play-by-blog Labyrinth Critical game.

I've had so much fun in the few days we've been delving that I decided to post my PC here. Meet Creighton-9, a stuffy, pompous robot who wants to cave your skull in and take your stuff.

Rolled-up under the Labyrinth Lord rules, he's totally compatible with my usual Mutant Future silliness.  (And as should be the case with all 1st level PCs, his bio is very brief.) 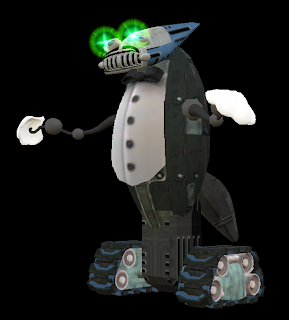 
After decades of loyal service to space-billionaire, coconut magnate, and all-around boorish lout T. Howell³, one greasy backrub too many caused majordomobot Creighton-9 to snap. He clobbered his master, purloined some valuables, and set out to accrue wealth (and an army of human servants, natch) for himself.  He's been dodging the authorities throughout the galaxy, and ended up on Vanth after exhausting his funds.

Creighton-9 is a mustachioed, 6' tall robot with tuxedo-like styling, and foot-treads.  He wields a bloodstained golden candelabra (nicknamed Severance Package), and uses a shiny silver platter as a shield.

His RoBritish sarcasm always drips with disdain and contempt.  And he can mix thousands of exotic cocktails the likes of which you could never imagine (but he hates you, so don't even think about asking him to make one.) 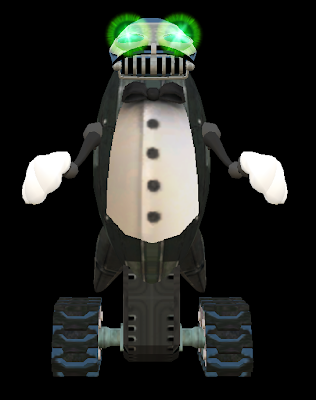