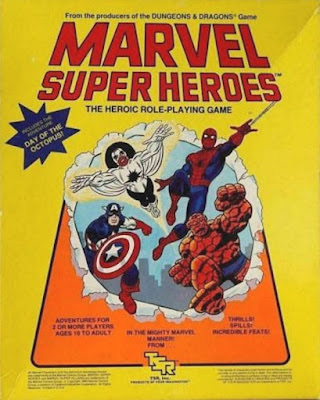 About (at least?)  a decade ago, Official Friend Of The Field Guide Theron Bretz tossed out a random campaign idea just as casual as you please...

What Lies In The Bottom Of Rick Jones' Locker?!!!

...with only the tersest descriptor beyond the logline:  "hoodlums break into Rick Jones' storage unit; hijinks ensue."  A specific system wasn't even mentioned (though I suspect Icons would've been the ruleset, given the timeframe and HERO System / Mutants & Masterminds fatigue).

Tragically, that campaign never materialized, but Theron's few words triggered an avalanche of ideas in Yours Truly.  (He's the Grant Morrison of gaming that way, and it's a privilege to float in his gaming pool.)   I've obsessed with Rick Jones' trophies and junk the entirety of these long ten years, conjuring concept after concept, iPhone note after iPhone note, and doodle after doodle.

I'm particularly riding high on Marvel vibes, what with Avengers:  Endgame and funnybook titles The Immortal Hulk, The Unbeatable Squirrel Girl, and The Amazing Spider-Man (particularly the "Hunted" arc) rocking my socks.  In that spirit, I'm going to be posting characters that've been rattling around in my brain, and basing them on how I'd run What Lies In The Bottom Of Rick Jones Locker?!!! myself.

Character Concept:  Your character must tie into the world of Rick Jones in some form or fashion.  Given that he's been sidekick to The Hulk and Captains America and Mar-Vell, plus the honorary Avengers mascot, a hero of his own, and deceased (with all that entails in a funnybook milieu), if you're stuck, you should turn in your Merry Marvel Marching Society membership manifesto, effendi.

Character Generation:  A tweaked version of the Advanced Set rules, combining both random elements and choose-your-own.

If the above is gibberish, you can legally download the MSH rules (plus genuine and fan-made material old and new) right here to follow along!

So, stay tuned for my own long list of PCs That Never Were, true believers!