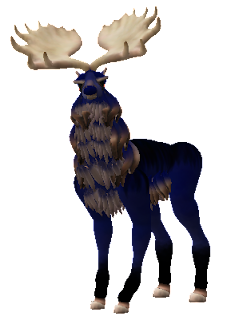 Umbrelk (both singular and plural) are massive nocturnal herbivores that stand 8' tall at the shoulder.  Woolly blue-black fur coats their frames, and majestic antlers sprout from their skulls.  They migrate through marshlands, dense forests, and cold, mountainous regions.

Thick waves and tendrils of "living darkness" whirl around an umbrelk's body.  From a distance, the creatures are all but invisible, but upon closer contact, the murk suppresses all ambient light (including man-made light sources) in a 30' diameter and Blinds anyone lacking enhanced visual senses.  The creatures strike from these shadows, Surprising opponents on a roll of 1-5 on a 1d6 and following up with goring attacks or Tramples.  Umbrelk are not affected by their own darkness, or that of others of their kind.

And while umbrelk can disrupt laser fire, they suffer +3 damage per die when actually struck by such attacks.

Like most herd animals, umbrelk are led by the largest male (who possesses an additional 1d12 Hit Points).  Each group is comprised of 4 females/young per male, and all young have half the standard adult Hit Points. 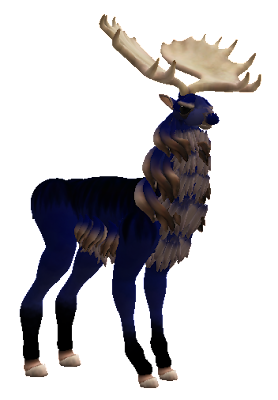