Mutants In The News — Glowworm Edition

Courtesy of the BBC...
Scientists have created the first creature with artificial substances wired into its genetic code.
"What makes the newly created animals different is that their genetic code has been extended to create biological molecules not known in the natural world. 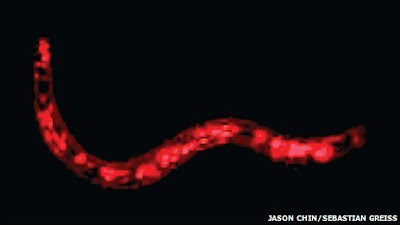 "Just 20 amino acids are used in natural living organisms...but [they] have re-engineered the nematode worm's gene-reading machinery to include a 21st amino acid, not found in nature."
The researchers go on to say that they could "introduce into organisms designer proteins that could be controlled by light."
Huh.
Worms controlled by light.
Sure, it starts there...but then you end up with worms that do the light-controlling...that happen to be 9-foot long, carnivorous, winged, and damage-resistant! 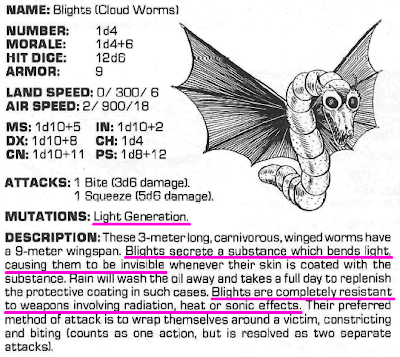 Jim Ward is like Nostradamus, only he gave us his prophecies a boxed rpg set.  And yet again, we ignore his warnings at our own peril.

Email ThisBlogThis!Share to TwitterShare to FacebookShare to Pinterest
Labels: Gamma World, Mutants In The News

Here's more of my belated musings from GenCon.  Blame The Man, as he's had me workin' like the dickens.

Every GenCon Thursday, at 9pm, I play Illuminati as hosted by the Rogue Judges.  Yes, I sometimes do Friday and Saturday nights, too, but Thursday is my night.  I've done this for almost every year that the show has been in Indy, and over that time, we've developed a crew of regulars that I only see at this specific timeslot.  There's Joe, the referee.  And Vince.  And Ed.  And George...who, whether he knows it or not, is my arch-enemy, because he wins more than I do.  Sure, we see other faces (and The Woman is slowly earning her place, as she's joined us twice now), but it's mainly us Big Dogs who've been the game since it was packaged in little ziplocked baggies. 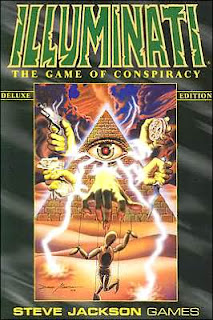 (Oh, yeah.  We actually do have something else in common besides our love of the game, and that something is "The Incident".  "The Incident" involves the only time I've ever played a boardgame where the cops were seconds away from being called due to a not-truly-justifiable-but-pretty-understandable-all-things-considered homicide.  Buy me a beer some time, and I'll regale you with the tale; print just doesn't do it justice.)

And, yes, I lost again this year.  I hate you, George.

Friday was All About Armageddon.  The Woman and I signed up for both of The Esteemed Tim Snider's Mutant Future games, which were scheduled from 10am-2pm and 4pm-8pm.  We're that committed to wasteland ramblin', and since I'm the GM of our current MF game, this marked the first time I actually got to play it with my spouse.  Kinda cool. 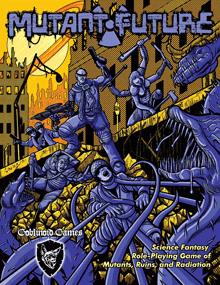 While Mr. Snider and I have chatted briefly on the ol' Web, this was my first time to meet him...and I was instantly smitten.  Big smile.  Hearty laugh.  Jaunty hat.  Bitchin' 'stache.  But best of all?  Hawaiian shirt.  I've been known to wear them myself a time or two—ok, ok...they're pretty much all I own, even for work—so I'm uniquely qualified to say that man can dress to impress. 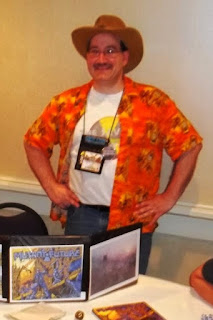 The first game was "Gimme Shelter".  Only 4 of us showed out of the sold-out 6 slots, but that wasn't a problem, as our other players were a delightful married couple who knew how to slang dice.  The 4 PCs we picked were:  a speedy and distracted Mutant Human, a burly Geologian, Plates the Mutant Armadillo (played by The Wife), and Android #7718, or "Bill" to his friends (Me).  [Good thing I wasn't Android #58008, as that nickname would've been awkward.]  Our mission was simple:  follow a map and loot a bomb shelter.

Almost immediately, we ran afoul of a pigman ambush, and combat ensued.  Plates and the Geologian got right into the thick of things by pulling the ol' "Fastball Special"... 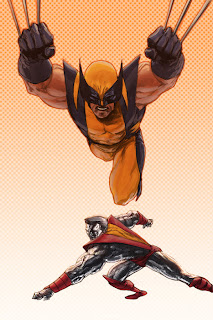 ...but it failed spectacularly with a roll of 2 on the die.  It was still awesome, though, and everyone was tickled so much that we riffed for a solid 5-10 minutes.  And the hilarity didn't stop, because Plates then decided she could pinball around the battlefield by tucking herself into a sphere like a certain kaiju....

I gotta say, Mr. Snider is a helluva sport for letting his players run amok.

After that, we raided the shelter.  Vines were chopped.  Ants of all varieties were slain.  Armadillos were again thrown.  A beaver/goldfish was rescued.  Canned Spam ("It's like armadillo crack.") and laser rifles were looted.

The final scene was the team being sent to investigate a fortress hidden inside a crumbling mountain that resembled human faces... 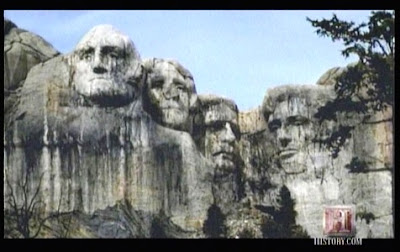 I can't wait until next year's game.

More mutant mayhem ensued, this time with the "Dead In The Water" scenario.  We had a total of five players this time, with us rounded out with a trio of veteran gamers who'd been hacking-'n-slashing together for decades.  One was a big, cuddly guy with the hearty laugh.  Another was the quiet and kinda uptight guy with the dark eyes.  The third was a twangy, eye-twinkling guy that you wouldn't trust with your wimmenfolk.

We were essentially playing with these guys: 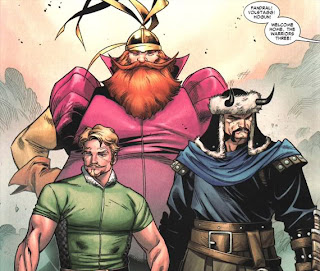 This event was a special treat, as Mr. Snider had a delightful surprise up his sleeve—he presented The Woman with a sheet for her own personal character from our own game, Penelope The Craw.  (Sure, she was scaled down a bit, but all that really meant was that she had fewer debilitating mutations than usual.)

You should've seen the look on my wife's face.  She lit up like a 6-year old girl who got a unicorn for her birthday.  She was so happy, in fact, that she started doing a "Penny The Craw" dance throughout the session, which was basically her wiggling side to side in her seat and snapping her hands like pincers to a beat only she could hear.

I picked Kordor the Mutant Owl, who—no offense to our gracious GM—was hilariously sucky.  His mutations were Control Light Waves, Precognition, and a Phobia, described as follows:

"PC is deathly afraid of the dark.  There must be a light source at all times, or he flies into a panic."

Soooooo...that meant I could dissipate light to create darkness...but then have a crippling freakout afterwards.  (Sure, sure...I could also disrupt lasers and become invisible, but it's much more fun to gripe.)  And the precog thing was just weird—especially in a con—as I didn't want to disrupt the event on the "Meta level".  But my concerns were baseless, as the one or two times I used the power, I'd just stone col' take psychic feedback damage...

...because my Magic-8-Ball-Sense only said things like:  "You will soon be devoured by carnivorous seagulls." 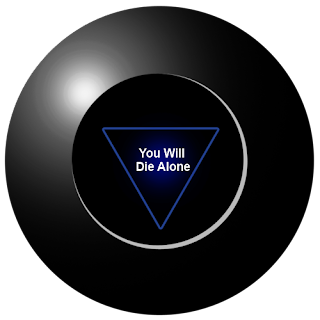 My Magic-8-Ball-Sense was a dick.

The game ended up being even more fun than the first, mostly because Rakish Guy played Snapthistle, the thorn-slinging Mutant Plant, as a be-sarape'd, cigarette-hanging-from-his-lower-lip'd hombre right out of the Spaghetti West.  The Snapthistle handle vanished almost immediately and was replaced by a better moniker, The Plant With No Name.

Waterlogged zombies were killed.  Polluted seas were sailed.  Underwater bases were raided.  Giant monster eyeballs were ruptured.  It was an amazing, amazing game.

And here's some context-free quotes from the session:

Again, be sure to check out The Savage Afterworld blog for more GenCon coverage.  Mr. Snider details plenty I didn't...plus, he has pics of my glorious mug over there.

Whew.  That catches us up to Friday night at 8pm.