Haulbots are the size and shape of Ancient earthmovers, and in times past, they carried the ores and minerals unearthed by mining bots (see p. 131 of the Mutant Future Core Rules) and borer blimps.
A haulbot's sensors prevent it from accidentally running over a human, animal, or other robot...but Mutant Plants, Androids, and creatures that lack heat signatures will be crushed indiscriminately, taking 4d10 damage.  (Androids weren't widely used during the haulbots' heyday, and consequently aren't factored into the robots' programming.)  The units are slow and cumbersome, though, and anyone in their path can make an Ability Check Versus DEX with a -4 bonus applied to the roll to avoid being hit.
In the Mutant Future, functional haulbots are often modified for use as troop- and slave-transports. 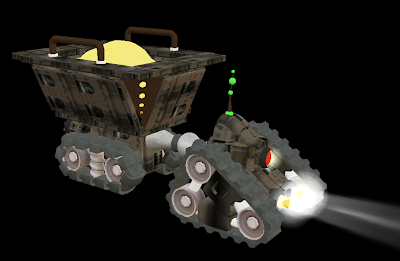