The twisted vath (both singular and plural) are 3' long beasts with 10' wingspans and 2 hideous heads.  The  left head sports wicked, hollow fangs for sucking blood, while the right head possesses bulging red eyes and slavering, venomous jaws (with Poison Class determined at random).  In combat, vath always begin by Beguiling their prey [see below].

A vath's hard, rubbery skin is particularly susceptible to the cold, meaning it takes +1 extra damage per die from cryonic attacks, and slows to airspeeds of 60' (20') when the temperature drops below 50 degrees Fahrenheit.

Vath congregate in caves, abandoned sewers, and ruins, and are fully active by day and by night.

New Mutation
Beguiling (Mental):  Makes all characters within a 90' radius use the least powerful of their weapons and/or mutations when attacking the mutant possessing it.  Every 6 combat rounds, each affected individual makes an Ability Check Versus INT; success means the influence is broken, and the target cannot be affected by this mutation again for a full 24 hours. 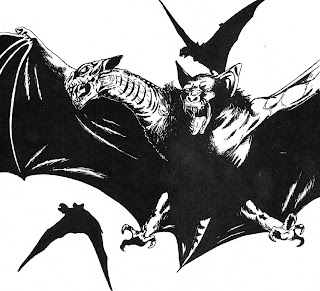 Not-The-Designer's Notes Addendum-To-The-Addendum:  Like most original Gamma World beasties, the vath's damage output is ridiculously high in Mutant Future / Labyrinth Lord terms.  But I'm fine with it, because the critters are supposed to be terrifying.