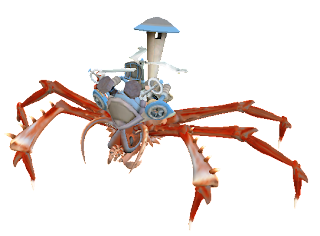 Crudbugs are 3' long, yellow-orange insects that nest anywhere but the coldest climes.  They are aggressive and territorial, and fight intruders to the death.

With adhesive saliva, crudbugs incorporate random scraps of metal, plastic, glass, and garbage onto their carapaces.  They also build giant colony mounds out of the detritus of The Ancients, which sport enormous "towers" and "chimneys" of junk.  Their "treasure" consists of not only the items stuck to their bodies, but also all the debris used to construct their nests. 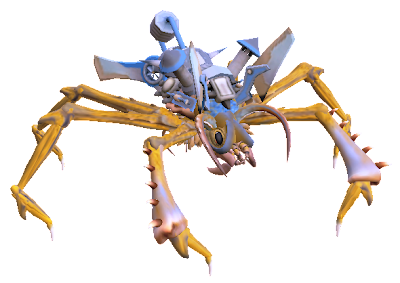 Alignment:  Neutral
Movement:  60' (20')
Armor Class:  -3
Hit Dice:  15
Attacks:  1 (bite or trample)
Damage:  4d8+2 or 5d10
Save:  L8
Morale:  10
Hoard Class:  XXI, XXII
XP:  2,400
A clunkbug is a crudbug specimen grown to horrifyingly immense size, reaching heights of over 13' tall and total lengths of 18' or more.  They, too, cover themselves with junk...but instead of random pieces of garbage, they inhabit the rusting hulks of Ancient automobiles.  Like hermit crabs of old, the creatures crawl inside the frame of a disused car, and "wear" it in such a fashion that only their heads and legs extend from the metal shell, with tires and assorted parts hanging off in disarray, and doors splayed looking like so many "wings".

Clunkbugs attack with crushing mandibles, or by Trampling foes beneath their bulk.

For some unknown reason, these creatures favor a particular brand of military-style SUV vehicles, hence the nickname "Humbugs".  [Any four-wheeled vehicle will do, however, so the Mutant Lord should feel free to adjust the Armor Class accordingly.  The -3 AC is only for the versions with densest metal plating.]