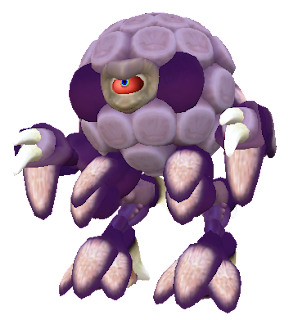 The richest, most famous, and most powerful of The Ancients never knew the fear of decay and death, as they remained eternally youthful by transplanting their minds into brand-new, beautiful, bioengineered bodies.  But during the Apocalypse, something went...awry...with the cryogenic cerebro-storage process, and those damaged cortex-tanks birthed a hideous and terrifying new race:  the Lohbim.

The Lohbim are 12' tall beings with spherical, bipedal bodies covered in thick, grayish-purple nodules—to describe them as "giant armored brains on legs" would be wholly accurate.  And while each Lohbim possesses immense physical and mental strength (with STR and WIL scores averaging 15+1d6), their actual intelligence fluctuates wildly between extremes of cretinousness (INT of 3+1d4) and brilliance (INT score of 15+1d6).

Their combat techniques (or lack thereof) explain why the Lohbim are known colloquially as "Cerebrutes".  They wade into battle, crushing and Trampling, and they intentionally target those with the highest Charisma scores.  Anyone struck by a Lohbim's freezing Energy Ray must also make a Saving Throw Versus Stun, or be Paralyzed for 2d6 rounds.

The Lohbim raid communities of Pure Humans and Mutant Humans, capturing all residents and dragging them off for mysterious, insidious purposes; because of this behavior, some hypothesize they are the driving force behind the Tripods [see p. 100 of the Mutant Future Core Rules].  The smarter Lohbim have also been known to pool their knowledge and resources with the Labwraths.

But all Lohbim hate—and maybe even fear—the Brain Lashers [see p. 63], as the latter consider them a delicacy like no other.

Their unique physiologies make them particularly vulnerable to electrical attacks. 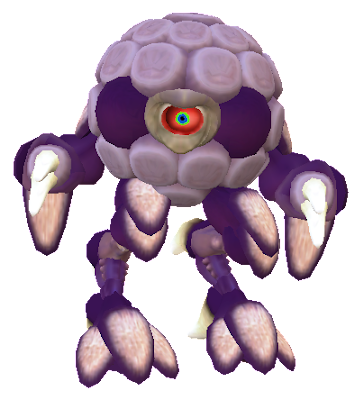