The second session of my Don't Mess With Wrexus campaign was Saturday, and it was an absolute scream from start to finish.  This GM is having some of the most fun of his 28-year gaming career.

The Prologue
A few weeks passed since Hobodeath, Grabthar Sniffles, and Penny had their run-in with the Xottles.  While Hobodeath spent her days being repaired by Tic-Tac (Gone-Woe's resident Meen'go mechanic), Sniffles and Penny took up training with The Scavengers, the town's elite scouts and foragers.  Thanks to their heroic actions, the teenage brother/sister duo were embraced with open arms into the fold; however, their father (Carl Clawson, a powerful figure in the town's leadership) was decidedly displeased with their dangerous career choice.

During this time, no Xottles had been seen, but they were clearly afoot, as small, turtle-shaped effigies were periodically found outside Gone-Woe's gates, along with shoddily-woven baskets filled with dead frogs, dried-out fish, crushed bugs, and flowers.

Penny, ever the diva, came up with a grand plan to procure metals and gemstones to make fancy gauntlets for her pincers.

Hobodeath: "You want to bedazzle your claws?!"
Penny:  "I want to look stylish."
Sniffles:  "You're the chav of the crawfish community."

But the resources simply weren't available in town, so this meant only one thing:  an expedition into the wildlands!  Humoring her, the trio decided to accompany The Scavengers on their next run.  They would head en masse to Red Crossing (a ruined hospital at the outermost safe zone around Gone-Woe, and waystation-slash-field hospital-slash-safehouse for looted goods), split up from there, find a ferryman to take them across the river, venture to the forboding and flooded "island" ruins to the south, and then regroup a few days later.  They packed their gear, and left the next morning.

The band (consisting of our heroes, plus the rescuees from last session:  Dave Clawson, Steve Clawson, the Pure Human Hummer Google, and lady Mutant Human So-Nee Twizzler) made small-talk en route, and noticed more "gift baskets" left at quarter-mile intervals, along with more turtle-sculptures.  Never ones to turn down free meals, Penny and Sniffles took the offerings with gusto, and our Android Hobodeath was utterly disgusted with the habits and rituals of "you mammals...or whatever you are."  They arrived at Red Crossing, and got a history lesson of the place from the senior Scavengers.  Some of the more experienced hands wanted to accompany the trio to the south, but the threesome insisted they'd be fine...and had their own plan on flesh out their ranks:  it was time to put Sniffle's Xottle followers to good use!

[This came as a complete and total surprise to the GM....] 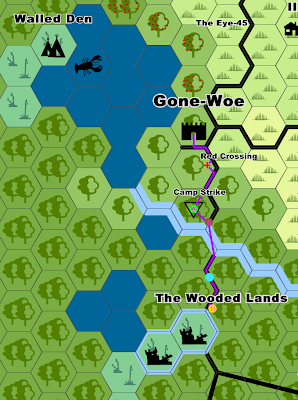 A)  Return To Camp Strike
The group tromped into the ruined campgrounds, but noticed things seemed a little...less ruined.  Underbrush had been cleared away, and paths were easier to traverse.  Ancient signage had new colors (ink?  dye?  blood?) sloppily applied.  The group wasn't sure what to expect...

...but they certainly didn't forsee stumbling through a tripwire trap that caused a volley of wobbly spears to bounce harmlessly off of Sniffles' shins.  Moving more cautiously, the group encountered a wall of mud and debris blocking their path; however, they just stepped over it—it was only 3' tall, you see—and then made their way to a clearing, from which emanated the familiar croaks and gurgling grunts of agitated Xottles...

...except they weren't agitated at all.  Instead, they were stomping about in formation and chanting in unison, and practicing stabbing each other with spears.  All while dressed in tiny, grimy, tattered blue uniforms.

Our heroes were dumbstruck.

Turns out the Xottles had been so inspired by their god and his earthly subjects that they decided to model their own village after Gone-Woe.  They tried to build fortifications.  They tried to organize their troops.  They even made attempts at agriculture...

...which consisted of some tubers and fruit half-buried in the dirt.  Clearly, the Xottles were going to need serious help.

After some whispering, the heroes came to a decision, and Grabthar The Shelled God bellowed a decree: "Your five mightiest warriors are joining us to explore the ruins to the south.  The rest of you?  Go now to Gone-Woe, so that you may learn the ways of Sniffles!!!"

Our heroes then strode southward to adventure, leading their mighty army!

[GM's Commentary:  I don't think I can adequately convey how hilariously this whole side-trek into the camp played out.  Not only was it completely unexpected from this side of the GM's screen, but the players' coversations (both in and out of character) were both hysterical and completely sincere.

Penny: "Do you see those fruits in the dirt?  That's just so very, very sad.  We're going to have to send them to farming school, aren't we?"
Sniffles:  "We should probably get them better weapons."
Penny:  "And maybe teach them to read...?  Are they going to have to move in with us?"
Sniffles:  "This sounds like a ton of work.  And Dad's going to be piiiiiiissed."
Hobodeath:  "S-I-G-HHHHHH.  I knew this would happen.  I told you to wipe them out them last time, but would you listen...?  NOOOOOOO."

The discussions then veered off into socio-economical-political territory, about how they'd go about shifting the Xottles' tribal mentality into something more "enlightened"....

So awesome.  So very, very awesome.]

A-1)  Flying Fangs Of Furry Fury
The group marched through the woods, and Penny decided to put on her fancy new eyewear [the Infra-Red Goggles found last adventure].  In the shade of the woods, she discovered that they weren't ordinary lenses, as living things appeared "bright" while other objects seemed "darker"...so when she'd periodically spy little critters in the grass, she'd giddily snatch them up and gobble them down.

Penny:  "I HAVE SNACK-DETECTING GOGGLES!!!"

Nightfall approached, and the group bedded down at the edge of the woods.  Penny had the first watch (but Hobodeath didn't trust her to stay awake, so she secretly stood guard, too), and was bored silly for a few hours until her goggles bespied two furry shapes peering from the undergrowth.  These intruders were interested in the frog-and-fish filled backpacks, and crept into the clearing to rummage.  Penny tried shooing them away, but then four more appeared from shadows....

Penny stabbed at one with her trident, grazing it.  At this point all six creatures started growling, and a whirring sound filled the woods...

...and then, too her horror, all six furry, surly beasts took to the air.  Oh, no—pozzooms! 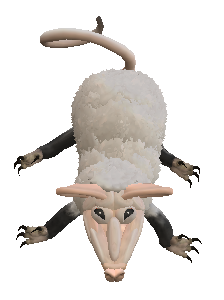 The night was suddenly filled with slashing and swearing and stabbing and screaming.  Grabthar and Penny were swarmed, and our giant turtle boy was cut to ribbons.  [In a fluke of terrible luck, this GM rolled nothing but 17s-20s for multiple attacks, and almost entirely maximum damage.  Sniffles lost over 70% of his Hit Points right off the bat.]  Xottles scattered in panic, and Penny missed every attack.

At this point, Hobodeath unleashed another of her secret armaments—a hole opened in her throat to reveal a small cannon, and she started blasting away with cold-beams.  This dropped some pozzooms, and rallied the our heroes.  The tide turned, and the varmints were vanquished (and some even exploded like hairy piñatas, as they had trinkets hidden in their pouches, which Hobodeath surreptitiously gathered).  It was time to tend to Sniffles' serious wounds.

And then the group realized that the didn't pack any first aid equipment.

B)  Don't Pay The Ferryman
The trio was terrified of staying in the woods near the site of so much bloodshed (particularly since Penny smells delicious to predators), but they also didn't want to return to Gone-Woe in shame and defeat.  They decided to continue south, and limped out of the woods in the hopes of finding a ferryman with some medical supplies they could barter.

Luckily for them, the encountered a grizzled old coot named Bruno with a pontoon raft...but precious few supplies.  They would have to cross the water, and hope for the best in the southern ruins.  In exchange for a piece of Sniffles' gear [a functional power-chisel, rolled on some Random Junk Tables at the beginning of the campaign], Bruno would "ferry them until the sun next set."  On account of Sniffles being 16' tall and almost sinking the boat, the group had to make two separate trips across the river, taking most of the afternoon.  But, finally, they made it to the other side, and Bruno was prepared to depart back across...

...but then everyone remembered that that the major ruins driving their quest were surrounded by marshes and water, meaning they would need a boat again...

...so they decided to hold Bruno to his bargain.

Group:  "You said we could use your boat until the sun set.  It's still light, and we can make it if we hurry...so you have to come with us to the next crossing."
Bruno:  "No, that's unreasonable."
Group:  "But you set the terms.  You have to adhere to them."

...but then Penny's player asked, out of character, "Hey...what are these things at the bottom of my sheet?  Mutations?  What does Empathy do again?"

It was at this point that Bruno got Jedi-mind-tricked into following the group to the next river crossing.

And Sniffles smugly took his power-chisel back.

Landloaches are sleek, cold-blooded creatures found in subtropical climes.  They reach lengths of 30' long (or more), and stand as high as Ancient horses.  While evincing characteristics of their aquatic lineage, the multi-legged landloaches are fully adapted to terrestrial life, and spend their days languidly grazing on vegetation.

Thanks to their hardiness and docile temperaments, landloaches make excellent mounts and pack animals.  They will Trample when threatened, however.