In the spirit of shamelessly ripping off the amazing collection of  He Who Is Known Only As Jay, I have a Tumblr.

A Field Guide To Doomsday

I freely admit that I have no idea what I'm doing, so crossing fingers here.  I just needed a place to put all the nifty pics that give me campaign ideas. 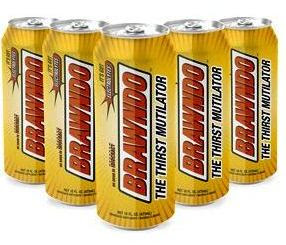 2006's Idiocracy posits an apocalypse spawned by neither atomic bomb nor otherworldly invasion, but instead appalling intellectual decline.  Sure, the knuckle-dragging future folk tear down the planet in plenty of the traditional ways (pollution, overpopulation, war), but they go that extra mile to ensure their own demise.  Case in point:  replacing the world's agricultural water supply with energy drinks.  Why, you ask?  Well, water is clearly disgusting because it's found in toilets, so spraying it on crops is hella gross...but Brawndo, The Thirst Mutilator?  That beverage is so popular and delicious, plants must love it—crave it, even!—as much as people do.  GENIUS.

Sure, sure...the ensuing dustbowl triggers total environmental collapse, and a starving humanity faces certain doom.  But, by god, no one is drinking toilet water!

Clearly, Brawndo is one of the greatest threats to humanity ever presented on celluloid...

...which means that, naturally, someone thought it was high time to bring it to market in The Real World, because some idiot would buy it.

They may well be The Last Cans On Earth!!!  It's clearly my sacred duty to immortalize the beverage for The Beings Of Tomorrow!!!

Let's do this thang. 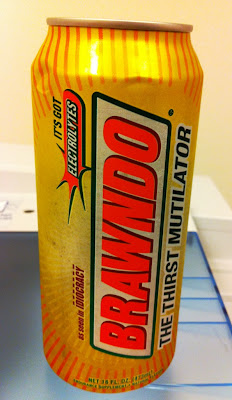 As you can see, the can is a little dented and dingy.  It traveled via the postal system to reach me lo those many years ago, and has gone through three moves since.  It's truly a Gamma World-ian artifact of the highest order! 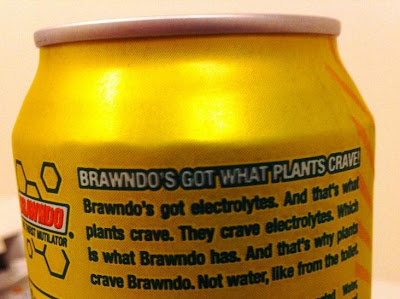 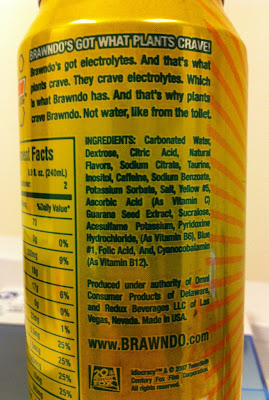 They had me at "pyridoxine".  Just like mom used to make! 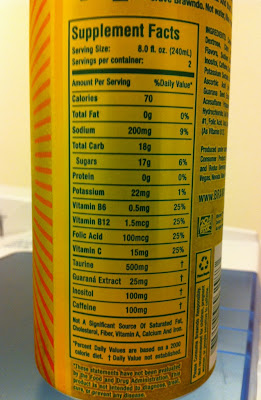 The larger the numbers, the greater the nutrition.  That's just science. 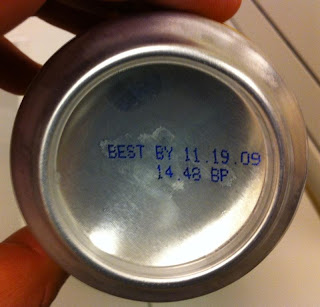 What could be more appropriate for this here post-apocalyptic blog than drinking long-expired chemicals not found in nature...? 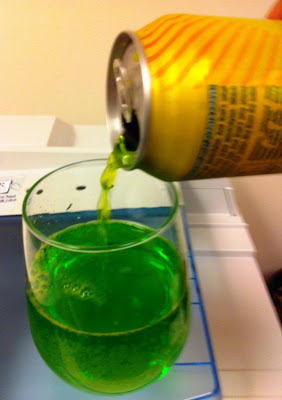 The disease-green fluid poured like the finest of wines.  You know, like those award-winning, world-class vintages Derelict's Select and Hobo's Delight. 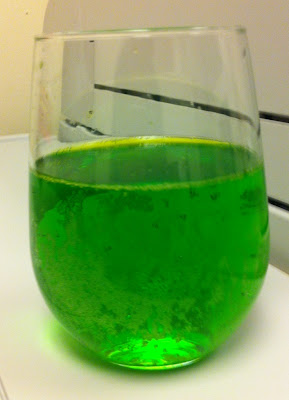 If this stuff was a Crayola crayon, the label would read:  MUTATION. 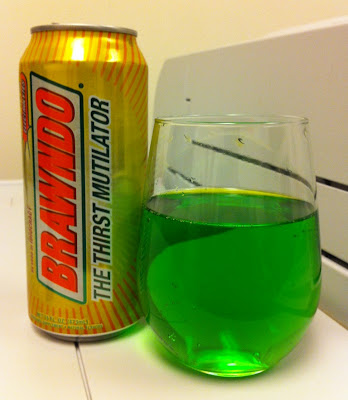 I got nothing snarky to say here, because I'm so impressed with my sense of composition. Just look at that majesty!

So, on to the tasting!

The bouquet of Brawndo can best be described as "erratically, overpoweringly artificial". Sometimes it has notes of the verdant syrup Sonic Drive-In used in their original lime slushes, until they went all "real fruit Limeade" in the early 1990s.  Other times, it reeks of Jell-O brand gelatin...but, bizarrely, NOT the lime-flavored variety, but instead red fruit punch, or pineapple.  But mostly?  It smells like furniture polish, with an acrid sting that accosts the nostrils.

As for the flavor, there's an overpowering, cloying, sickly-sweetness infused with lime.  Yes, this beverage makes "sickly-sweet" into a legitimate flavor.  And one can DEFINITELY taste those plant-satiating electrolytes, because, man, is Brawndo salty.

The whole concoction can be summarized in three words:  briny Mountain Dew.

You'll want to brush your teeth sooner than later, because of the bitter and murky—yes, murky—aftertaste.  And you'll need some water, because your thirst ain't exactly mutilated with all that saline.

I'd be remiss if I left out the texture.  Brawndo has a subtle, vaguely insidious thickness, so that it doesn't so much stream down your gullet as slither.  Ever had the nasty Pakistani breakfast "delicacy" called paya?  It's a gunk—the words broth, soup, and/or gravy just don't suffice—comprised of liquefied cow hooves, and  it looks, tastes, and oozes like molten silly putty....and when consumed, it aggressively creeps between the teeth and clings to the tongue, cheeks, and throat.  I'm not kidding; eating paya is like eating evil.  Brawndo triggers that same queasy sensation, like your mouth is being molested. 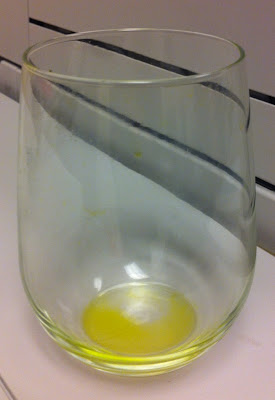 That was the glass immediately after I drained it.  So I tried drinking it again...and again...and again.  No matter how many times I tilted it to my lips, that remaining juice just wouldn't empty. Brawndo's residue is JUST THAT TENACIOUS.  You can actually see the viscosity!

Hmmm.  All those pictures remind me of something...

...and that some thing is the devil-goop from John Carpenter's Prince Of Darkness.  That demonic slurry just HAD to be Brawndo.

Oh, one more tidbit:  ALWAYS drink Brawndo ice-cold...like, antarctic-cold.  If you let it get to room temperature, the stuff gets even more viscous, and acquires a pungent tang very much like urine.

A few years back, I was in an all-night housework frenzy, and I drank two cans of Brawndo in the same twenty-minute span.

So, what's the final verdict on The Thirst Mutilator?  Not only is it pretty disgusting, but it's an offense to Mother Nature.  There is no way, shape, or form that the stuff is good for you; it mutilates your innards, not your cravings for hydration.

But I'd be lying if I denied my fondness for it.  It's actually drinkable when nigh-frozen, and provides a hefty kick when you're run down.  And I kinda like gross things, because of the resultant jolt to the ol' palate; I'm totally That Guy who goes, "Hey, this is awful...YOU GOTTA TRY IT!!!"

(And like the finest wines, I bet my Brawndo stash is gonna taste AMAZING decades from now.)