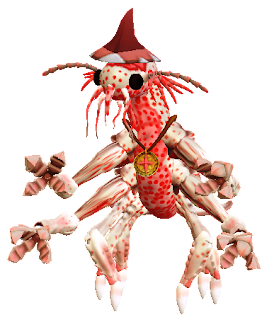 The Krillgrim are sentient, 10-limbed crustaceans that reach 5'-7' tall.  They are a proud, generous, and kind people, being both strong-willed and charismatic (average WIL 16; average CHA 17).

Krillgrim live as missionaries, priests, healers, and traders that all promulgate an eccentric religion, The Ingestion Gospels.  The tenets state that all organisms are united through unbreakable cosmic ties, and it is the overall duty—and greatest spritual joy—for every living thing to be devoured by a larger entity so as to maintain the pure cycle of existence.  Krillgrim priests lead bands of followers up from the briny depths and march as deep landward as they can, with the overall goal of reaching the domains of large predators...where they lay down their arms and await the sweet embrace of death.

This is not to say that they are strictly pacifists, however.  Krillgrim believe that they can only advance into the Afterlife if they are killed and eaten by something larger than themselves.  This means that they will actively defend against attacks by equal-sized or smaller beings and creatures.

For obvious reasons, many in the Mutant Future fail to see the allure of The Ingestion Gospels...but because they are so persuasive, Killgrim missionaries never suffer a lack of converts; any group will be accompanied by 3d6 followers and retainers consisting of all character races but Androids.  And because they are skilled healers, most communities welcome Killgrim bands with open arms.

Ironically, Killgrim are photosynthetic, and have no need themselves to eat. 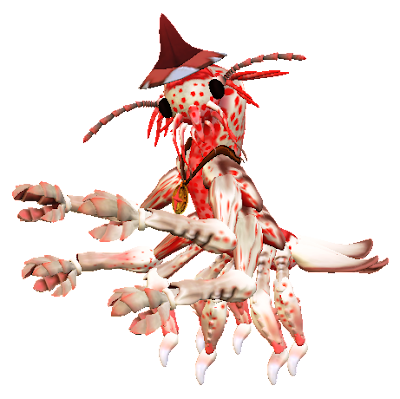