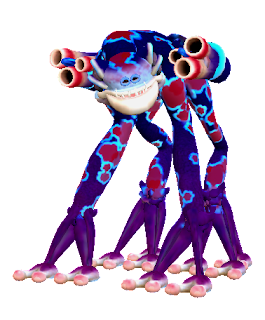 
The spindly, slimy abominations known as bombfrogs are hideous bioweapons devised by the maddest of Ancient scientists.  The grotesque creatures stand 12'-14' tall on their bifurcated legs, and their height and extra eyes combine to give them a +2 To Hit bonus with all ranged attacks.  They are never Surprised.
Through demented surgeries, bombfrogs are outfitted with a variety of projectile weapons.  Roll twice on the chart below to determine any given bombfrog's payload:
1:  12 micro missiles (7d6 damage, 30' blast radius, 1500' range)
2:  6 mini-missiles (50 HP damage, 60' blast radius, ½ mile range)
3:  6 blood agent grenades (1d6 damage per round for 1d3+6 turns, 30' blast radius, 200' range)
4:  6 concussion grenades (Stunned  for 1d4 turns, 10' blast radius, 200' range)
5:  6 frag grenades (5d6 damage, 20' blast radius, 200' range)
6:  6 photon (lethal) grenades (Death on failed Save -2; reduced to 1 HP and Stunned for 2d4 turns with successful Save, 30' blast radius, 200' range)
There is a 75% chance that, upon dying, a bombfrog will explode in a fireball that does 8d8 damage in a 50' radius.  And even if one doesn't explode, only an individual with the Intellectual Affinity (Tinkerer) Mental Mutation can successfully remove a bombfrog's weaponry for reuse.
Bombfrogs require constant hydration to maintain stable internal temperatures, and are prone to overheating.  There is a hardier, dry-terrain subspecies known as "turret toads" that lack such weaknesses, but these lumpier, slower specimens have -1 HD and reduced 60' (20') movement.
Mutations:  Aberrant Form ("Launcher-Pods"), Aberrant Form (Multiple Limbs), Epidermal Susceptibility (Requires Immersion Every Hour) [D], Epidermal Susceptibility (+2 Per Die From Heat-Related Attacks) [D] 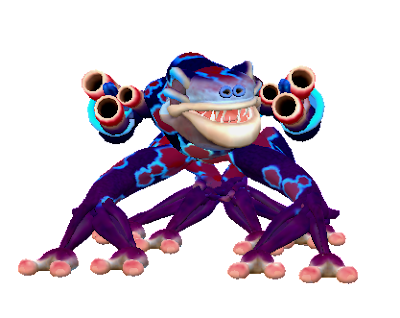 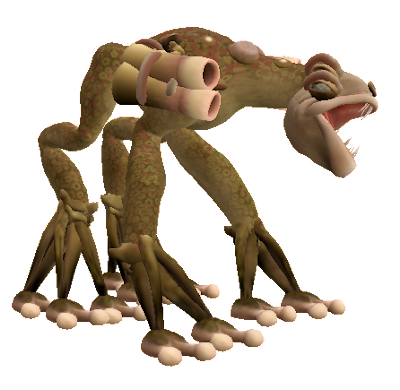