A Mutastic Weekend Of Gaming Goodness

Man.  What a weekend.

Just wrapped up 2015's North Texas RPG Con, and as always, it was a hoot AND a holler.

I'm pretty wiped after playing games from Wednesday to Sunday (OH, PITY ME!!!), so this'll be a meandering, down-n-dirty recap.

Wednesday involved dinner with Official Friend Of The Field Guide, The Abominable Dr. Causey, and his fetching (and not hunchbacked at all) assistant.  Sushi was consumed, and much catching up was done.  It's always great seeing The Doc, and it's a damned shame we live so far apart.  HE TOTALLY GETS ME!!!

(It is at this juncture that I must mention that Official Friend Of The Field Guide, Our Friendly Neighborhood Sniderman, was greatly missed!  Not the same without you, man!)

Afterwards, Mrs. Field Guide and I were supposed to go play in an AD&D tourney—you know, the kind that actually keeps track of points and such—but I kinda got sidetracked...

...by a verrrrrry comfortable leather sofa.

In the hotel drinkery, no less.

Yes, I am apparently That Guy that passes out in a bar...with a baby.  Freakin' shameful.

Mama played in the event, though, and her team ultimately came in 1st Place for the weekend.  I am an amazing hireling! 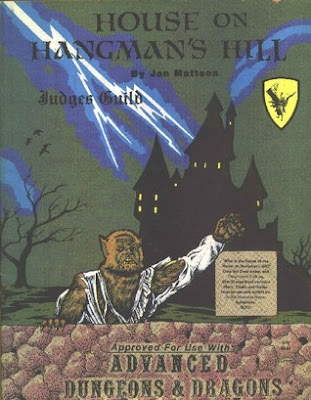 And by "insanity" I mean "how the in the hell did the designers expect eight 2nd-3rd level weaklings with hardly any spells, silver weapons, and / or magic items to survive this ridonkulously hard murder-module chock full o' ghouls, ghasts, lycanthropes, wights, gargoyles, and wraiths and ALSO Confusion traps that pit half the party against the other in bloodthirsty conflict?"

Yeah, yeah...I get that's how we rolled back in Ye Olden Dayes.  No whiners allowed.

But after seeing several PCs get level-drained to henchman status—and one of those then disintegrated into dust as they hit Level Negative One—I can say with battered-n-bloodied authority that some adventures are just garbage.  I mean, at one point, I was actually relieved that, while in the middle of an attack by ghouls and their hulked-out ghast boss that paralyzed over half the party, I fell into a concealed pit trap right in the middle of the conflict.

"Yay, this pit that almost killed me is the safest place in the mansion!"

(And to add to the worst-ness of it, the pre-gens had names like "Bernie Madoff" for the illusionist / thief and "Brother Mayhem" for the cleric...and there was both a Chaotic Evil assassin AND a Lawful Good paladin in the party.  UGH.)

Cool module cover, though (even if it's a tad shady).  I loves me some Oliver Reed werewolfery. 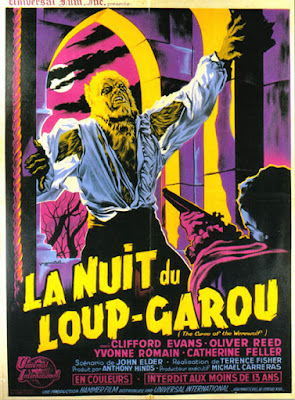 Thursday night was Ben Burns' annual Paranoia craziness.  That event always sells out instantly at registration, and the table's infectious laughter drowns out the entire hotel. 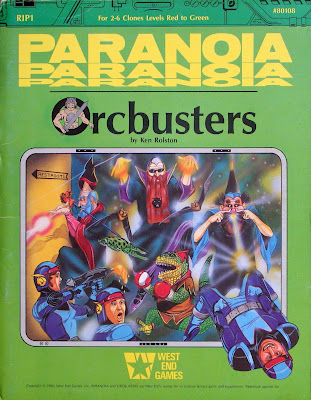 The parody is strong in that module.  So very, Very, VERY strong.

Depending on your druthers, that is either a bug or a feature.

I remain mum because I adore the GM in Real Life. 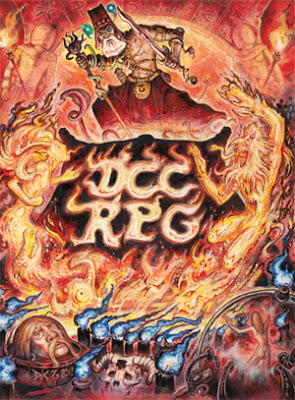 The adventure was called "The Drunken Wizard", but I have no recollection of actually meeting the title sorcerous lush, as...

a) my PC died halfway through, and

See for yourself.  Here's a list of context-free quotes from the game:

) "Glenn Danzig has appeared in more 'DCC' games than anyone else alive."

) "I'm gonna pop a cap in the dog. I turn my crossbow sideways."

) "He comes up doing some intimidating moves."
"Wait--is this a dance-off?"

) "You just Wilhelm Scream'd the dude off the building."

) "That dog obviously stabbed the guy."

) "I feel this job would go a whole lot better if we got some drugs."

) "I'm gonna stab that guy with the hollow eyes.  I don't know what that shit means, but I don't trust it."

) "He has that look that he has murdered people before."

) "She's even more pissed off after she killed you."
"I have that effect on women."

) "You do realize that all our adventures end in fire?"
"It *does* seem to be a running theme."

) "That's awesome.  You open a door, and The Doom From Space is there."

) "I think that calls for another Drug Abuse Roll."

) "So you take this as a cue that you should take a vacation from Lankhmar."

Seriously.  Before you die, play under Kovacs.  Bucket list that wit' a quickness. 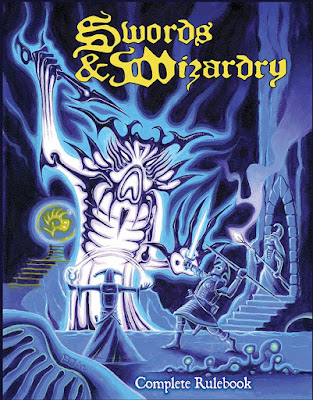 Jennell Jaquays ran "Wet Nightmares", a revamped version of her "Night Of The Walking Wet" adventure.

She's just the sweetest, kindest, most mellow GM ever...but we played for five hours, and the first combat involved a ghoul.

For eight 6th Level PCs loaded down with stuff.

And it kicked our asses for far too many rounds.  Our dice suuuuuucked.

Combine the lackadaisical pacing with an obnoxious player who spent the first hour checking the walls, the furnishings, the garbage, the floors, the ceiling, the garbage again, and the walls again WHILE THE REST OF US WANTED TO GO THROUGH THE SECRET DOOR WE FOUND IN THE FIRST TEN MINUTES, the evening was a total slog.

And I still don't know where the "wet nightmares" came in, as the only moisture we encountered in those same five hours was a very short bridge over some liquid that had tentacles that tried to knock us over (but which totally failed, because they were so easy to bypass).

So no soggy dead at all.

Just a single sloggy one.

Saturday morning was a game I was TOTALLY geeking out over:  Top Secret... 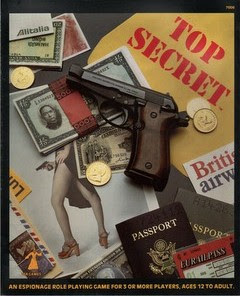 ...run by creator Merle Rasmussen himself, no less!!!

Man, what a game.

It was as if  your favorite, twinkling-eyed Grampa played cops & robbers cowboys & Indians spies & spooks with your ten-year-old-self on a lazy summer afternoon.

Our mission involved air-dropping by night into the desert camp of a mad sheikh who was subsidizing terrorism with sales of roboti-camels and avian-shaped drones of his own design.

And I played an assassin code named The Dazzler.  I ad-libbed, "I'm the assassin you DO see coming."

Saturday night was a super-secret playtest of an upcoming Goodman Games product, Mutant Crawl Classics!  (Goodman formally announced the game at a panel Saturday morning, so we're free to gab.)

About time we get to the theme of this here blog, eh?

Writer Jim Wampler ran the event, and it was a blast.  The game plays pretty much like DCC, and hits all the same mechanical beats.

Here's some Things Of Interest to those of you out there of a post-apocalyptic bent:

The game, called "Museum At The End Of Time", was a blast.  My three morts—Trebek the PSH, Sajack the Eagle, and Wink the Yak—made daggers out of the teeth of a fossilized dinosaur skull and we all made it to the end of the adventure.  As everyone was exhausted, though, nobody went through the leveling process to get mutations.

Sunday was more mutant mayhem, with the highlight of any NTRPGCon, Steve Winter's Gamma World game! 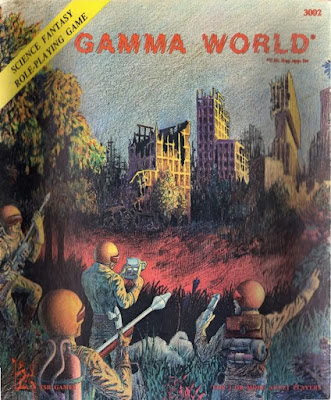 He always runs 1st Edition, and you roll up your characters randomly at the table.  No pre-gens here!  Winter ensures we end up with a mad mix of mutant goofery. 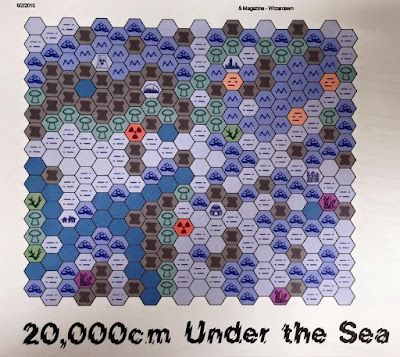 ...involved an underwater hex-crawly foray into the radioactive depths to determine the source of mysterious "Hubbard Rays" that were bathing the landscape.

We met just the nicest and most polite carnivorous electric eels that needed slaughterin' before exploring the sunken ruins, but the adventure took a wholly unexpected turn upon encountering some land-crawling whitefish that were rivals with some wholly-aquatic striped bass.

One teenage whitefish boy in particular happened to be smitten with a bass-lass, but their respective parents didn't approve of their relationship!  So we radiation-hardened mercenaries had to arrange a secret romantic rendezvous for the youngsters AND appease their parents AND teach the boy that his race could breathe under water the entire time, but they had just been too scared and too bigoted to ever try in the first place!

So, in a nutshell, our adventure was essentially this:

That's all I can recall at the moment.  It was a whirlwind of games and friends and good times. 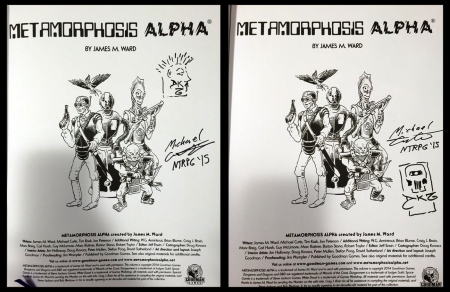 Those are the signatures of Michael Curtis and The Aforementioned Kovacs, dudes instrumental in getting Metamorphosis Alpha back out in the wild for new generations of gamers.  (Sadly, author Ward had to cancel his con appearance.  Get well soon, Jim!)

I have two copies, and they generously added some pizzazz to the tomes.

I'm wiped.  Thanks for reading.