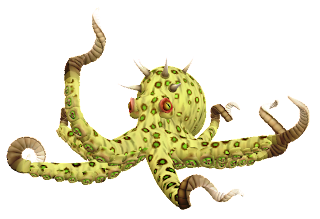 Cactopi are secretive creatures that inhabit desolate wastes and badlands, scuttling across the sands and lurking in rocky outcroppings.  Their dun-colored, pulpy bodies are covered in small spines, and each of their eight tentacles ends in a spear-like woody barb.  Their central mass is about 3'-4' in diameter, and their tentacles can elongate to lengths of 10'.

Lacking mouths, cactopi draw liquid sustenance through their tentacles...and given their habitats, they primarily drain it from living prey.  They hide just beneath the surface of the sands, and then lash out and plunge their barbs into unsuspecting victims.  Each successful hit not only does the initial piercing damage, but also an additional 1d4 dessication damage each subsequent round as the target's fluids are drained away, ultimately leaving only a withered husk.  Furthermore, for each tentacle constricting in this fashion, the victim suffers a cumulative attack penalty of -1.  A tentacle can be severed if a total of 8 points or more damage is done with one blow.

Able to detect even the most trace amounts of moisture within a mile radius of their locations, cactopi always focus their attacks on adventurers carrying the greatest quantity of bottles, flasks, and/or water/wineskins.

When combat goes against it, a cactopus discharges a 20' diameter cloud of spores that induces a severe hacking and coughing allergic reaction [treat as a Class 11 paralytic poison].  The creature flees during the confusion.

Due to their spiny bodies, anyone successfully striking a cactopus bare-handed sufferes 1d4 damage. 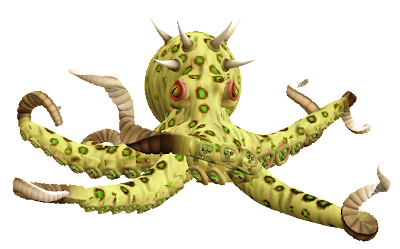