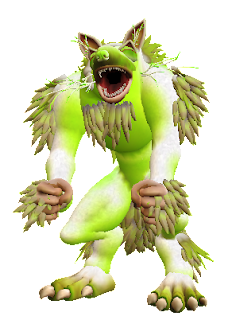 
Moonatics are savage lupine humanoids that stand 6'-7' tall and weigh 450-550 pounds, and their shaggy, stark-white fur glows an unholy, phosphorescent yellow-green.  Despite their feral temperaments, their eyes burn with malevolent intelligence.

Combat with a moonatic is fraught with peril.  In addition to the carnage inflicted by their claws, teeth, and disorienting howls, their bite induces Confusion on a failed Saving Throw Versus Stun.  This effect lasts for 1d6 Turns.  Once a victim is Confused, the offending moonatic moves on to another target, hoping to spread the contagion to unafflicted foes.  The beasts then ghoulishly wait for the berzerk victims to injure or kill their fellows, and then rush in and devour dead and living alike.

Most settlements besieged by moonatics end up destroyed not by the creatures themselves, but by their own rampaging, infected citizens (often dubbed "mooniacs").

Furthermore, any Pure Humans, Mutant Humans, or mammalian Mutant Animals that lose more than 75% of their Hit Points to a moonatic's melee attacks—and survive, of course—must make a Saving Throw Versus Poison or transform into moonatics in 1d4 weeks.  There is no known treatment for this affliction, though some shamans and healers profess to know of elaborate cures involving rare herbs, strange chemicals, and Ancient nutrient supplements.  Unless a solution is discovered, Player Characters thus transformed are turned over to the Mutant Lord as NPCs.

For purposes of their Neural Telekinesis, all moonatics are considered to have a WIL score of 15+1d6, and they can move WILx20 pounds.

Their distinctive glow prevents them from Surprising any opponents but those lacking visual senses.  And though their fur loses its radiance after death, it is still a sign of great martial prowess to wear garments made from their pelts.

Curiously, most moonatic packs make their lairs near ruined military installations, airports/starports, and aeronautic museums, or the wreckage of fallen satellites. 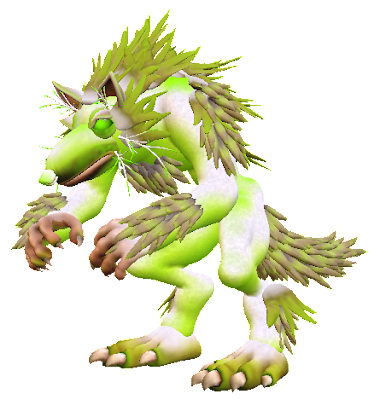 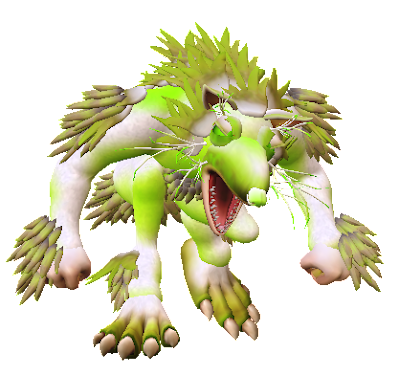