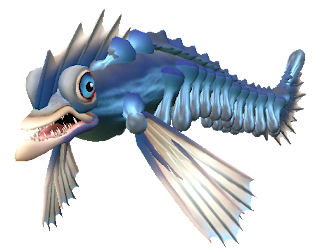 
As the waters of The Ancients' era became increasingly polluted with toxic heavy metals, one species evolved in the most extreme manner possible:  quicksilverfish essentially transformed into living mercury.  They are slender, shimmering fish that reach lengths of 3'-4' long and possess undulating bodies that stretch and compress as needed to slip through the tiniest of apertures and narrowest of crevices.  Quicksilverfish reside in both fresh- and saltwater, and are often encountered in polluted waterways, rivers, and lakes both above and below ground, plus ruined hatcheries, water parks, and zoological aquariums.  No net can hold them.

Their bite injects a Class 5 poison, and their composition makes them inedible to all but the hardiest mutants.

A quicksilverfish is only harmed by energy attacks; damage from all other sources breaks the creature into smaller organisms of reduced mass.  Each successful strike creates a new fish of 2 HD that does 1d4 damage, and these micro-fish eventually mature into standard 4 HD adults.

Conversely, individual quicksilverfish can merge into a larger composite organism.  Two 4 HD fish can spend 1 round to combine into a 5 HD fish with maximum HP (any previous damage to the individuals is ignored) that does an additional +1d4 damage.  Each subsequent addition of another 4 HD fish contributes more mass, adding another full +1 HD and doing another +1d4 damage.  [So, four separate 4 HD quicksilverfish become a composite 7 HD organism with a maximum 56 hit points that does 4d4+3 damage.  Continue as necessary.]  Upon reaching 10 HD, the now gigantic beast gains the Swallow ability on a roll of 18-20...and given their resistance to cutting attacks, there is no way to escape unless the creature is killed by external means.  Anything consumed in this manner takes 1d12 damage per round, and drowns—and is digested outright—within 10 rounds.    Theoretically, there is no upper limit to the size a composite quicksilverfish can reach.  Upon slaying, XP is calculated by the total value of the individuals, or the total HD of the composite—whichever is greater.  Quicksilverfish always appear in schools when first encountered, as they seemingly only merge when threatened...and then separate when the threat has passed.

Damaging a composite quicksilverfish breaks the creature down into distinct individuals again; as above, each successful strike from a conventional weapon dislodges a 4 HD fish (with its original Hit Points) off from the mass, reducing the larger's HD and damage as appropriate.