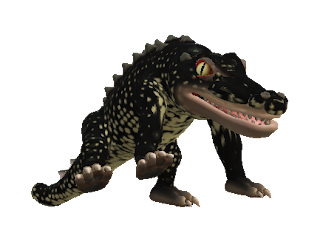 
Crubbers are almost identical to ordinary Ancient crocodiles [as per p. 68 of the Mutant Future Core Rules], except for one glaring exception:  their hides, flesh, and organs are freakishly comprised of a resilient, rubbery compound.
While susceptible to Mental Mutations, crubbers are nigh-invulnerable to harm.  Conventional melee weapons and firearms just bounce off their hides, and they are fully immune to electricity-, explosive-, and chemical-based attacks; every other type of physical assault does only one-third damage.
Crubbers can spring and bounce great distances, and they easily pluck unsuspecting prey from higher elevations (or the air!) by pinballing off of objects and terrain.  The Mutant Lord should treat this bouncing as if crubbers possess a Fly movement rate of 180' (60'), but they must launch from a flat surface, and can only maintain their "flight" for a maximum of 2 consecutive rounds before landing.  Crubbers also get +2 to Damage, due to their momentum.
Mutations:  Aberrant Form (Rubbery Body) 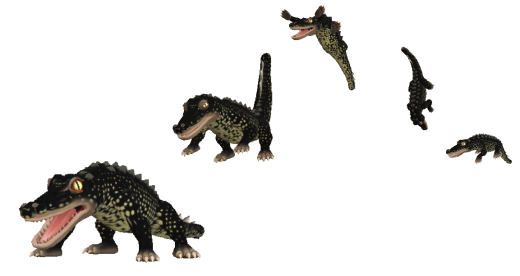 
Designer's Notes:  These critters are loosely based on a 2010 nature special I just learned existed, 'The Crocs That Turned To Rubber'.  Apparently, river pollution in South Africa's Kruger National Park is killing off nile crocodile populations by solidifying the animals' body fats into a semi-solid gel.