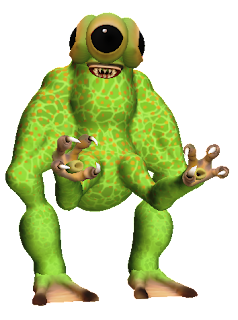 
The noisome remorgas are three-eyed, rubbery, man-sized amphibians that haunt swamps, waterways, sewers, and cave systems.  They skulk on the fringes of cities and trade routes, so as to be as close as possible to their favorite source of food:  intelligent beings.

Remorgas are drawn to, and actively hunt, sentients with high WIL (15+) scores and/or 2 (or more) Mental Mutations.  Lurking beneath the water's surface, they lie in wait until suitable prey draws near, then explode forth (with the victim consequently suffering a -1 to Surprise rolls).  If both claw attacks hit successfully, the target is grappled in a crushing, face-to-face hug, whereupon the remorga's clutching palm-siphons burrow into the spine...and once attached in this manner, the remorga envelops the top of the head with its razored maw (doing an additional 1d10 damage in the process, with no To Hit roll required).

And then the horrid feeding begins.  Each round that the remorga is attached in this fashion, it greedily leeches the victim's cerebro-spinal fluid (causing 1d12 damage per round) until either the target or the remorga is dead.

Remorgas can also clutch onto the backsides of creatures (animals and intelligent beings alike) their size or larger, digging into the shoulders and neck and semi-swallowing the head as above.  While the target still takes the initial claw and bite damage, it is not drained each round; instead, the remorga uses Parasitic Control to dominate them.  It is a horrific sight to see someone "wearing" a remorga like a living cloak and being used as an unwilling, powerless "mount".  Hushed rumors and campfire tales tell of hidden underground colonies swarming with remorgas and their ambulatory puppets.

Remorgas apparently have no language of their own, and show no apptitude for tools...yet they seem to possess a malevolent cunning.  Some scholars suggest that remorgas might not be sentient beings in the proper sense, but may temporarily become so upon absorbing and retaining the "intelligent essence" (including, theoretically, the Mental Mutations) of their victims.

They are never surprised. 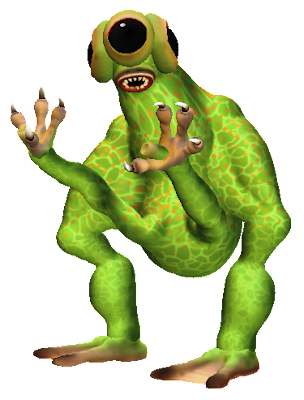