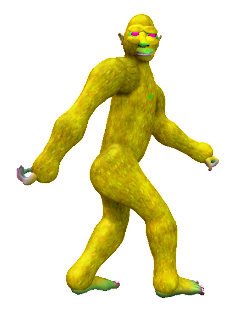 
Blastsquatches are horrible, hirsute hominids found in swamps and forests thick with vegetation warped by toxins and radiation.  Their 10' tall frames bulge with muscles, and their musky fur glows with a sickly incandescence.  Jagged teeth protrude from slavering lips.

Unable to feel pain, the creatures are exceptionally savage, and gain +2 To Hit with all attacks.  And if a blastsquatch successfully strikes the same target with both claws in the same round, it inflicts an additional 1d8 crushing damage.  This squeeze only works on 'squatch-sized targets, or smaller.

Blastsquatches have a particular...fondness...for Pure Humans (especially attractive members of the opposite sex), and those that aren't outright devoured are captured and "adopted" into the tribe....

For the Savage Worlds version, visit our affiliate, The Haunted Spookshow Of Channel X!!!