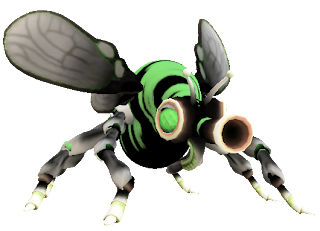 Buzzookas are large, soft-bodied insects that reach 3' high and 5' long.  They draw sustenance from plant nectar, sap, pollen, rotting fruit and vegetation, and dung, and congregate in floral jungles and overgrown ruins.  Their wings generate an insistent, grating hum.

When threatened, buzzookas discharge an incendiary mass of multi-colored plasma from their snouts at a range of up to 25'.  This attack can prove quite dangerous to adventurers, as not only does it do damage outright, but also has a 45% chance of igniting flammable liquids, powder-based ammunition, and paper goods.  [Such combustion does additional damage, as the Mutant Lord sees fit.]

If a buzzooka is reduced to 0 Hit Points or less by piercing weapons, firearms, and/or energy attacks, the volatile gases within its body erupt in an explosion that does 5d6 damage to all within a 10' radius.  A successful Saving Throw Versus Energy Attacks results in only half damage, and buzzookas themselves are immune to the explosive effects of their fellows' deaths. 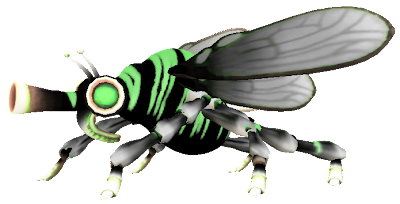