It's a bounty of polyhedrals, because in addition to my new Dungeon Crawl Classics campaign, I've relaunched my Mutant Future game for The Woman and some of her work chums.

Adventure abounds around Gunspoint!  The closest point of interest is The Scareport, a once-bustling travel hub now awash in decrepit wreckage and freakish "living lights".

To the east lies The Queen's Wood.  Who—or, more accurately, what—The Queen is remains utterly unknown, as none who have seen her have survived the experience.  Her ever-expanding army of Mutant Humans and Mutant Animals shake down the locals, demanding larger and larger tributes...with the implied threat She will overrun the landscape.  The ruined Drearbrook Mall taunts scavengers with its promises of riches beyond imagining.  (But if that's the case, why hasn't The Queen claimed it as Her own...?)

Going northward are two key villages that supply food to the region.  Walled Den, home to The Craw, provides fish and aquacultural staples, and the citizens of Gone-Woe farm and ranch on their relatively pristine and healthy lands.

Illis and Grieveland are communities that just can't catch a break, as there's always some disease, predator, and/or random disaster that afflicts them.  The current rumors about their worries are the most ridiculous yet, involving cyclopean chickens and renegade robots....

And speaking of renegade robots, no one dares venture too far north into the dead forests of Huntsvile.  A giant, headless, humanoid statue warns all to stay away, lest rampaging security-droids drag you screaming into the bowels of the region's numerous Ancient-but-not-so-ruined prisons....

The savage Wooded Lands take up much of the west.  Crypress, a secluded monastery for the "Brotherhood Of Thought", is the only settlement on the fringes.    Like Drearbrook, the ruined Woebrook commercial mecca lures the greedy and the foolhardy.

The Blank Zone is a mysterious area avoided by all, as no one who enters ever returns...and those who insist they actually arrived from there have no memories of the place.

To the south of Gunspoint lie the most dangerous regions.  The Downtown is an expansive sunken city where the skeletons of Ancient skyscrapers jut from polluted waters.  With its labyrinth of submerged governmental buildings, museums, banks, Fortune 500 companies, and nightspots of old, who knows what wonders lie beneath the surface...? And then there's the Blastrodome complex, a "mega-maze" with as many legends (involving gladiatorial games, subterranean slavers, monstrous trucks, cloned rock-gods, great beasts, and bloodthirsty cults) as corpses littering its grounds.

The Slime Barony is home to sentient fungi who prowl the swamps astride monstrous mounts and worship the powers of all things atomic.  Any who enter their lands must pay tribute or convert to their arcane beliefs, or suffer the consequences.  Only the Crules in the verdant Scareland are mighty enough to stand up to the Slime Barons' wrath.

Fearlake houses the crumbling husk of the NASTAR space program.  Rumors persist that the ruined center holds the keys to traversing the spaceways...assuming the wolves don't get you first....

The waters poisoned beyond all belief, The Burning Sea is a fiery graveyard of slagged ships and spewing petrochemical plants.  But many insist there are riches within the fiery tides, and they're plundered by the mutation-riddled pirates that call Graveston home.

Here's a list of random words / phrases / people that tie into to the morass-y majesty of Gunspoint and its territories:

) gator raiders
) "N-R0N, The Thing That Should Not Exist"
) "The Psych Ward Psions"
) slicksand
) "Slakewood, The Oasis Of Blood"
) "The Star-Old's Brewery"
) "Satan's Cerebrums, The Science-Bikers"
) Exxon Honda, a.k.a. "The Kingpin Of Corruption"
) "The Monstrose"
) "The Aquarium"
) diesel demons

The first real session is tomorrow.  (Last week, they rolled up characters and got a feel for the system by blasting a school of adorably toothy shunks.)  Stay tuned for updates!!!

Mutants In The News — "Tripping The Light Rat-astic" Edition

Through the wonders of cerebro-implants, scientists have given rats the ability to "touch" and "see" invisible infrared light.

"This was the first time a brain-machine interface has augmented a sense in adult animals," says clearly mad scientist.  "We could create devices sensitive to any physical energy...magnetic fields, radio waves, or ultrasound." 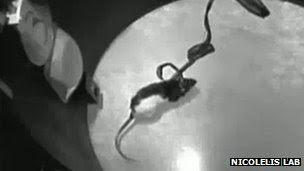