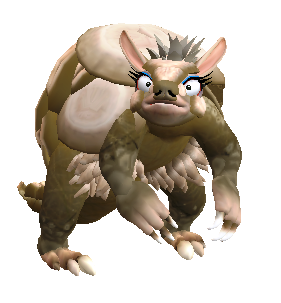 Description
"Plates" is a fiesty female who works as an elite "recovery expert" for one Barter John.  Short (3.5' tall), squat, and stubborn, she pluckily barrels (figuratively and literally) into combat without regard for the consequences.

In combat, "Plates" is a melee machine.  She gleefully pummels foes with her stun baton (affectionally nicknamed "Twitchy"), and also loves to be lobbed by her stronger colleagues onto unexpectant foes.  Furthermore, she can tuck herself into an armored sphere so as to roll around the battlefield.  When in orb-form, she can't see her opponents very well (suffering a -3 To Hit penalty that can't be offset by her stat-derived +2 hand-to-hand bonus); however, on a successful strike with a damage roll of 6-8 on 1d8, she sends her target flying 4d6 feet away, and knocks it prone.

"Plates" can easily trundle about on all fours, and sometimes does so to trick observers into believing she's just an ordinary, non-sentient critter.

It pained "Plates" to her core to give Barter John the stockpile of artifacts (laser pistols, laser rifles, power clips, LazAb armor, a hologram projector, and more) retrieved from that ant-infested bunker.  She secretly pilfered the IR goggles, survival kit, Stimshots, and canned meat, and prays her thieving isn't discovered. 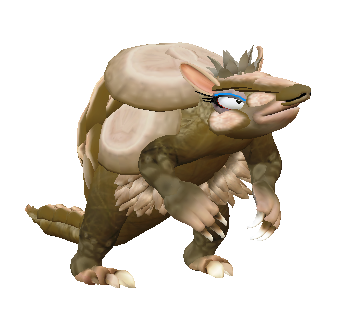 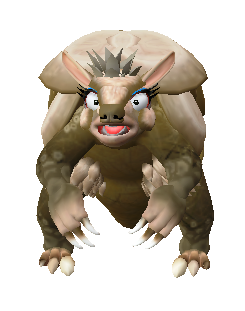 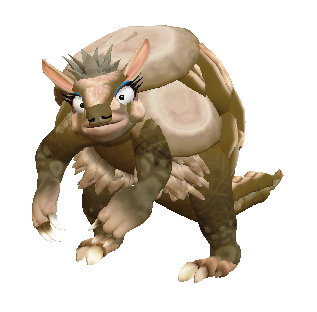 "Designer's Notes":  I put the quotations around those words because I had next to nothing to do with this entry, as Tim "Huh—Those Stats Are Kind Of Ridiculous, Aren't They?" Snider designed her and Amy Taylor gave her the personality and the pinballing.  My only contributions were adding the claws (since all Mutant Animal characters get one natural weapon), the Aberrant Form mutation (to embody the aforementioned pinballing effects derived in-game), the "real" name, and the pics.  Again, I claim NO CREDIT for the awesomeness that is "Plates"!

Also, items marked with a [*] were acquired by the group during play, and not on the original character sheet.  I included them simply because, no matter what PC she plays, Amy is greedy for loot. 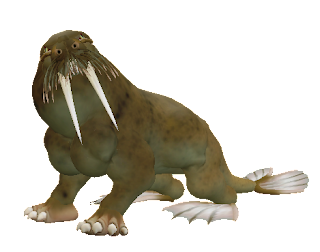 The size of the largest Ancient big cats, walverines are savage pack hunters with ravenous appetites and nasty temperaments.  Their slick hides ripple with muscles, and razored tusks and snaggled teeth protrude from their bristly maws.

Walverines are relentless predators (with Teleportation compensating for their relative lack of speed), and a favored tactic is to bloat and expand a prey item's mass to both hobble it and generate extra meat for the pack.  And their particular suite of Mutations makes them almost impossible to kill, so it's fortunate that they exhaust easily.

Walverines are just as comfortable in the water as on land, and are known to Teleport onto—or into—seagoing (and submerged) vessels to devour the hapless crews.