I expanded my Post-Apocalyptic Naming Guide, and tried to put it into convenient table form...but creating a table in Blogger is a nigh-impossible nightmare.

After too many hours and too many web searches, this is the prettiest I could make it.  I apologize in advance for its clunkiness, and the inability to print it.  I guess I can email the original table, if anyone wants it.

I also posted a link (under Radioactive Resources) off to the side, so y'all can find it later.

You know the drill.  Roll 'em, or mix and match to your heart's content.  (Some sound more gender-specific than others, but I didn't want to limit them like that.)  Be sure to scroll up and down on the chart itself, as the numbers go 1-20.

And I gotta say that Bic Marlboro—Raygun For Hire gives me the giggles. 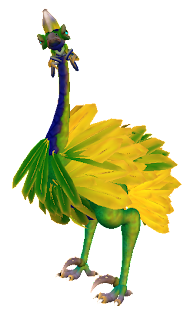 Standing an impressive 6'-7' tall, shatterbirds are flightless avians with garish plumage, and their heads sport bony crests and prominent wattles.  They dwell almost exclusively in Ancient ruins and wreckage yards, and bound across rubble and debris with uncanny speed and nimbleness.

Shatterbirds feed on glass, and they possess a terrifying mutation that facilitates their dietary needs:  they project beams from their eyes that transmute organic carbon into silicon, effectively turning their targets into glass.  This ability functions like the Energy Ray Physical Mutation, with two key differences.  First, each successful hit raises a target's AC by 1d3, and secondly, it doesn't do direct damage; instead, the Mutant Lord secretly tallies the damage done by the beams.  When a victim takes enough damage to equal or exceed its Hit Points, it solidifies into a lifeless crystalline statue.  [The Mutant Lord should use flavor text to describe the effects of the beams, like "innards turning to ice" and "heavy, lifeless limbs" and such.]  Inorganic matter is unaffected by this process, as are targets protected by force screens and/or powered armor.

Shatterbirds attack with beaks and wicked claws.  They also use their crests as crushing mallets, or battering rams (when combined with a Charge maneuver). 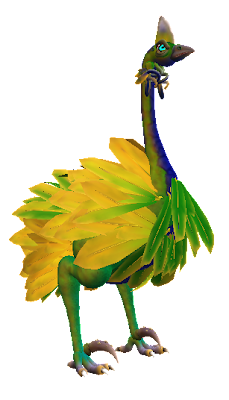