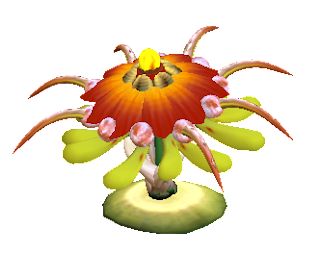 
Found in swampy and tropical environs, bloodblooms are hearty plants with thick, squat 2'-3' tall stems and stunning 5'-7' diameter flowers.  They appear harmless enough, but whenever a humanoid or animal closes within 90' of the plant's optic bulb, 1d6+4 hollow barbs stealthily emerge from beneath its petals.
Once the prey closes within 60', the bloodbloom launches its barbs...which happen to be connected to tube-like vines housed in the underground portions of the stem.  Bloodblooms can target up to 4 victims at a time, and fire multiple spurs (but no more than 3) at each.  Every successful hit imbeds a spur within the torso of the victim(s), and after the initial piercing damage, the prey suffers a sustained 1d4 damage per thorn per round as the lifeblood is sucked away.
Bloodbloom vines have an AC of 7, and can be severed if sustaining at least 6 hit points of damage in one strike (resulting in a gory geyser of fluids).
Once the victims are dead, the plant retracts its vines with the corpses attached, and drags the bodies underground to use as additional sustenance.  These remains, and their corresponding possessions, constitute the bloodbloom's "treasure".  It takes 1d3 full turns to dig out a dead bloodbloom and unearth its "loot".
Mutations:  Full Senses (Thermal Vision), Projectile Thorns (Modified) 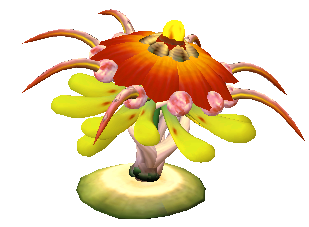