Lepterrans are lithe, 8' tall, asexual humanoids with massive wings made up of scaly feathers / feathery scales.  Their feet end in prehensile claws, with which they manipulate objects and wield weapons.  Wriggling clusters of tentacles obscure their mouths, and their red eyes burn with malevolence.

Five times per day, a lepterran can discharge a 25' radius cloud comprised of shimmering, microscopic shards that seemingly have no effect on any caught within.  However, 3d8 hours after exposure, all inorganic objects (armor, weapons, artifacts, robots, architectural structures...even Android PCs) exposed suffer Class 6 poison damage.  [The Mutant Lord should determine the specific effects on characters' possessions.]  And the damage is cumulative—if, say, the lepterran discharges 3 times on the same targets, the final damage roll is 18d6! 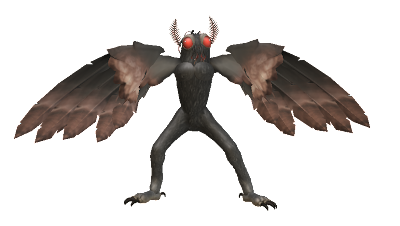