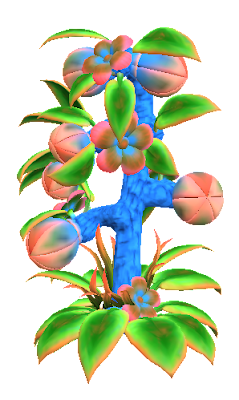 
Kablooms are woody, tree-sized plants with distintive day-glo coloration, sporting blue bark, neon-green leaves, and pinkish-orange flowers and fruit.  They are found in jungles, forests, and wetlands, and they feed off of moisture and nutrients in the earth.

Each kabloom has 3d10 highly explosive fruit-pods that not only deal 2d8 damage to all within a 15' blast radius, but also release a 15' burst of radiation (intensity determined randomly).  And while immobile, a kabloom can detect movement within 40', and launch its pods up to the same distance away.  The plant is hardy enough to resist damage from pods (and other explosives) that land close to its trunk.

Every 10 Hit Points of damage inflicted on a kabloom detonates 1d4 pods.  Those caught in the blast radius are struck automatically by the blast wave, but may make a Saving Throw Versus Energy Attacks to dodge its affects; a separate Save is still needed against the radiation, however.

Shamans and healers use kabloom extracts in their poultices and remedies, particularly those that treat heart conditions. 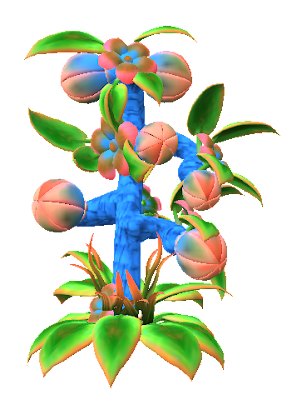