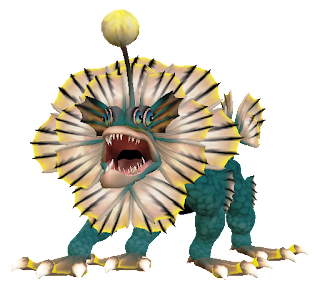 An anglion (rhymes with "ganglion") is a bizarre predator roughly the size of an Ancient big cat.  It has large jaws, 4 eyes, a scaly hide, a mane and tail-bristles comprised of rows of poisoned spines, and a prominent bulb jutting from its forehead.  They prefer wet environs (being equally at home in fresh and salt water), but also prowl swamps, grasslands, forests, caves, and ruins.

While capable hunters, anglions prefer lying in ambush, and luring prey with their strobing bulbs.  Their bioluminescence can be seen up to half a mile away.  The light has a peculiar effect on sentients, as any seeing it within 50' are hypnotized on a failed Saving Throw Versus Stun.  An entranced victim shambles up to the lurking anglion, and stands helpless as the creature gets in one free round of attacks, at which point the victim awakens...

...however, anyone successfully striking an anglion with a melee attack—whether unarmed, or with a weapon—must immediately make an Ability Check Versus Dexterity to avoid the beast's quills.  Failure indicates being stung and injected with venom of Class 1-10 (determined at random on a 1d10).  Truly, the only safe way to combat an anglion is from a distance!

Anglions also use their bulbs to generate a disorienting flash, which acts as the Optic Emissions (Bright Eyes) Physical Mutation.

While there are distinct physiological similarities between anglions and the larger bearcudas, they are not related; it's simply convergent mutation in action. 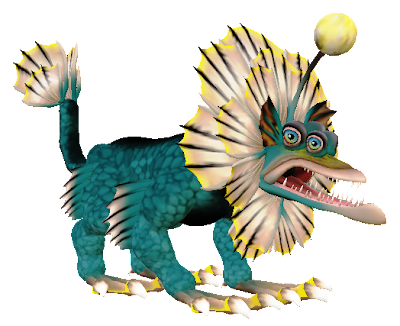