'The Mutant Epoch' Non-Review (or, "Pincers: The Pinchening") 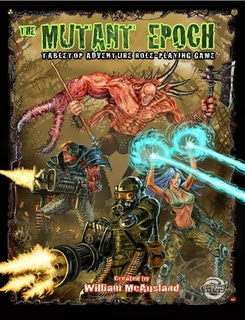 That I loves me some post-apocalyptic gaming is an understatement, and this blog is a testament to my sensibilities:  Gamma World, Mutant Future, Damnation Decade, and Superhero League Of Hoboken are the bee's knees, while the likes of Twilight: 2000, Darwin's World, and Fallout generally leave me cold.  (I adored the Roadwar 2000 and Wasteland games on my Apple IIe, though.  Go figure.)

Basicially, if I can't roll up a lightning-breathing bat-man with quills and narcolepsy, or if the world isn't sufficiently wonky, then I'm not all that interested.

That brings us to William McAusland's / Outland Arts' new rpg, The Mutant Epoch.  I've been excited for this one, as it seems to combine what I love with plenty of grim-n-gritty for the kiddies.

My copy arrived Saturday, and I've poured over it the last few days.  But I'm not ready to write a formal review (if I'll ever be); no, this post just collects my gut impressions about the book.

) Mr. McAusland draws like a sunnuvabitch.  Are there any pictures he didn't do?

) The work's overall vibe, thanks to the art and "chart-iness" of the rules, made me nostalgic.  I felt like I was reading one of my beloved games from my late teen years, like GDW's Dark Conspiracy.  No, wait—Stellar Games' Nightlife...yeah, that's the one.  This is a good thing.

) ...spiked pincers seem so ubiquitous, those without are the REAL freaks.

) The bestiary absolutely, positively rocks.  And if I may be so arrogant, some of them (like the land pikes and wolf frogs) are critters that I'd design for this very blog...except mine would come out kinda adorable, while Mr. McAusland's are terrifying.

) I can't let The Wife know about the Slave, Whore caste-class, because she'll want to scrap Penelope the mutant crawdad and play this game instead.  Or she'll make Penny change professions.... *shudder*.

) Every game—no matter what genre—I referee from this moment forth will have a treasure table listing a dead rat, saved for dinner and shrunken head, worth 2d8sp.

) Build-Your-Own-Dice in the back, behind the graph- AND hex-paper?!  Sweet.

) I think know I'll buy everything Outland Arts puts out for this game.

I hope my enthusiasm for the book shows.  I freely admit I'm intimidated by the system (and, really, I'll probably end up just stripmining stuff for Mutant Future), but I'm randomly rolling up a character now...

...who's gonna be a Bestial Human Bobcat.  I'm smiling here.

PS:  The website has a "Kids Corner" with a mutant coloring book.  Outstanding.