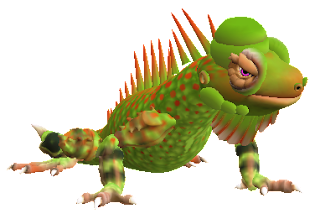 The race of creatures known as Idguanas are scaly, slender lizards that reach total lengths of 3'-5' and stand about about 1' off the ground.  They appear almost exactly like their Ancient ancestors, except for possessing distended, over-sized craniums.

Idguanas have vast mind-controlling abilities.  Any sentient being—including Androids and Mutant Plants—entering within 50' of an Idguana must make a Saving Throw Versus Stun, with failure indicating that the subject is hypnotized and forced to do the creature's bidding.  The victim gets bonuses to the Save, based on the higher of their Wisdom or Charisma scores as follows:

During every waking hour, those hypnotized are allowed another Saving Throw, with success meaning that they are (temporarily) free and can't be controlled again for another 1d4 Hours.

Those with Mental Barrier are completely immune.

Idguanas are wretched beings.  Besides being greedy, hedonistic, and gluttonous, they thrive on sowing disharmony and misery.  Their individual methods vary, but an Idguana's standard modus operandi is to invade a small, isolated settlement and systematically corrupt it.  Some Idguanas lurk in the shadows, subtly influencing the residents to unleash their worst tendencies and darkest desires, culminating in bloodlust and  carnage.  Some present themselves as kindly gurus and sages, gradually turning the village into a cult-like compound full of devout zealots.  Other Idguanas just blatantly enslave the populace, and live like decadent emperors.

On those rare instances when they are overthrown, Idguanas direct their remaining brain-slaves to destroy the town and each other, and in the chaos, they assert Parasitic Control over a poor individual and flee with their "mount" into the wastes.

Idguanas can comprehend and speak all known languages.