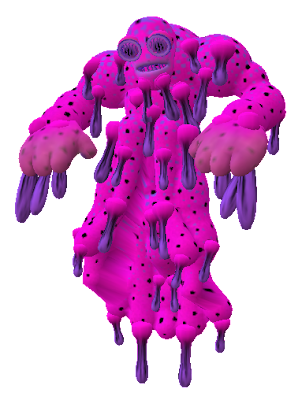 The Ancients greedily guzzled high-caloric beverages infused with various electrolytes, stimulants, vitamins, anti-oxidants, and, ultimately, even nanites.  The strange radiations of the Mutant Future altered the remaining stockpiles of these liquids, giving rise to the malevolent fizzfiends.

Fizzfiends are aqeuous creatures found in comestible stockpiles (often trapped in cans and bottles seemingly too small to contain them), or storage tanks and vats in ruined bottling plants.  While they are ordinarily 7'-9' tall and 3'-5' wide, they have full control over their size and shape, being able to stretch, compress, elongate, and flow as need be.  They appear in a wide variety of unholy colors not found in nature, and reek of bizarre fruits and extracts.

They feed off the bio-electical energies of their prey.  In combat, a fizzfiend will either pummel with its fists, discharge a shocking jolt, or engulf the target so as to "drown" it with surging liquids.  Whenever this attack is used, the victim must make a Saving Throw Versus Poison to avoid permanently gaining the Quickness Physical Mutation, but at a severe cost: acquisition of a corresponding Frailty Drawback that manifests as jittering, debilitating insomnia.  For every day afflicted, the target suffers 1d10 damage, -1 to attack rolls, -1 to Saving Throws, and -10% to Technology Rolls; these effects are cumulative.  Even if somehow still alive at the end of 7 days, the victim perishes from sheer exhaustion.  Shamans and healers know of no cure for this condition.

Due to the complex chemical stew comprising their forms, fizzfiends' physical attacks do double damage against Plant-based foes.  They are immune to normal weapons and resistant to mental attacks, but vulnerable to temperature- and energy-based attacks and armaments. 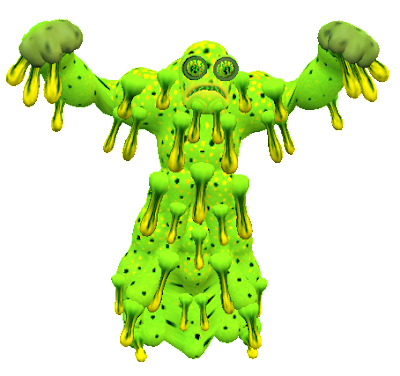