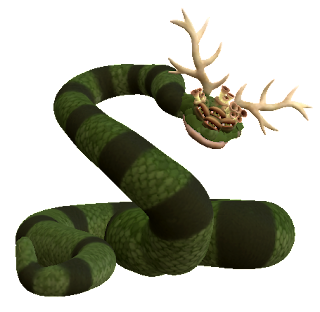 
Xerices are 20' serpents that inhabit scrublands and savannahs, lurking in pits, craters, and abandoned animal dens.  They gore their prey with antlers, and with a successful hit, follow up with constriction for an additional 2d8 damage.  This damage continues on subsequent rounds.

And from the nodules on its head, a xerix can expel a cloud of acrid blue gas 20' in diameter that hyper-dehydrates all matter within its confines.  Against wooden weapons, items, armor, and "ordinary" plantlife, the gas acts as the Disintegration Mental Mutation (with the xerix having an effective WIL score of 8+1d4).  Mutant Plants and plant-based creatures take 8d6 damage, but may make a Saving Throw Versus Poison for half damage; Pure Humans, Mutant Humans, and Mutant Animals suffer 4d6 damage, and make the same Save.  Androids are completely immune to the gas.  The cloud lasts 1d4 rounds, and the effects are continuous until it dissipates.

A xerix's multiple eyes are highly sensitive.  While xerices are Surprised only on a roll of 1 on 1d6, they are also terrified by the flashiness of laser pistols, blaster rifles, and similar weaponry. 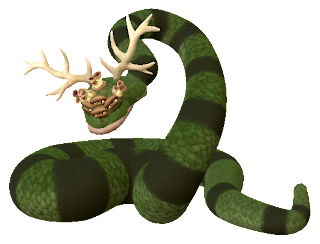