Mutants In The News — "You're So Vain" Edition 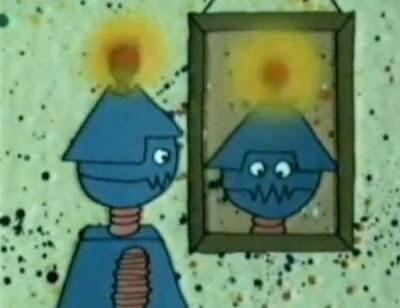 The BBC reports that Yale scientists are attempting to teach a robot named Nico to recognize itself in the mirror, one of the classic psychological tests in gauging / determining self-awareness.

In 2007, scientists got a robot to recognize motion in a mirror, but "this [test] is based on appearance rather than motion," says doctoral candidate Justin Hart.

If successful, robots would join the short list of non-human species—dolphins, elephants, and primates—able to recognize themselves.

Man.  The sin-borgs and kill-bots of the future are going to be even MORE terrifying if they start worrying about their sheens and paint-jobs and such. 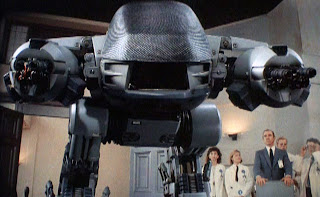 Radioactive Review — 'Menace From The Wasteland' (2012) 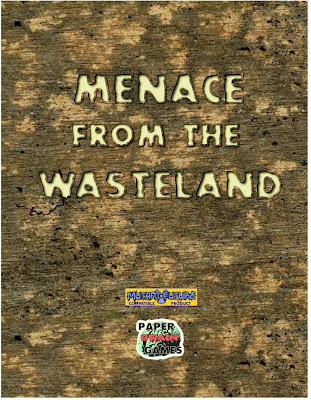 A few weeks back, I was issued a complimentary copy of Paper Brain Games' Menace From The Wastelands via RPGNow.com.  It was a pleasant surprise, as there was no advanced notice, and I can only assume that author C.T. McGrew sent it himself. So...mucho thanks, C.T.!  (And in case you don't speak Spanish, that means "much thanks" in English.)

I read it on the plane to Gen Con, and here's my review.

Menace From The Wastelands is a 35 page PDF with 4 pages devoted to cover, credits, and legalese.  There's also 1 page at the back for scribbled notes (appropriately titled "Notes"), leaving 30 pages of content.  Of those 30 pages, 20 are text (16 adventure, 4 bestiary), and the other 10 are colorful maps.

There's plenty of appropriate art to break up the text, and the entirety of the work looks clean and organized.  The layout is appealing.

A self-described "sandbox style adventure", MFTW is broken down into 6 locales:  an isolated farm free of post-apocalyptic toxicity, a spooky swamp, some ruins, a monkey mining camp [sadly, the monkeys are the miners, and not the resources], menacing woods, and a monstrous ant colony.  There certainly seems like a lot for PCs to do.

Leiningen's Farm
The 6 mutant NPCs at the farm have been peacefully raising sligs (pig-slugs) [AWESOME], chickards (chicken-lizards), and assorted other critters...but then the giant ants arrived.  The farmers want the PCs to solve the problem, and then perhaps settle down and join their ranks.

The farm feels a bit you-meet-an-old-wizard-in-a-tavern-y for me, but the NPCs are fleshed out, and McGrew adds descriptors for "mannerisms" and "quirks" in addition to the usual stats.  That's a first in a Mutant Future product, and it's a nice touch.  And 2 of the NPCs have a dark secret, involving a shout-out to A Boy And His Dog. 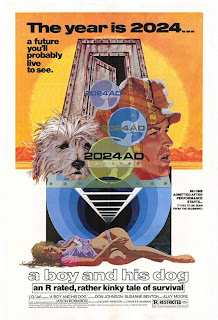 The Stinking Swamp
Per the text, this "location is not connected to the ants in any way," but it may tie in with the aforementioned dark secret.  It's really just a stomping ground for over-sized animals, frog-men, and dangerous terrain, and a perfect way to get the PCs eaten or drowned in quicksand.

I'll freely admit that I'm a sucker for swamp-based adventuring, but the swamp is just kinda...there.  If I were using it, I'd trick out the area with a ruined biolab in need of looting, or downed Ancient satellite.  Something to add a little more zest, and change up the mutants from typical marshy fare.  But I can see why McGrew didn't go that route, because that's just clutter up the place when he already has other ruins on the horizon.

The Ruins
The Ruins are a cluster of crumbling buildings (that can perilously collapse) that serve as home to a colony of Mutant Future's unofficial mascots, the spidergoats.

Turns out the site was a former military installation focused on trans-dimensional teleportation tech.  It's up to the Mutant Lord to determine where the trans-portals go if the PCs get them up and running.

Two hyphenated words say all that that really needs to be known about this location:  vibro-katana, and self-destruct.  Genre classics!

This section is really just a throw-away bit on the map, but it's my absolutely favorite part of MFTW.

The Screaming Woods
How convenient that The Screaming Woods are home to a mutant monster called The Horrible Screaming Monstrosity.  It's a gal with a pretty face...but also multiple arms, wicked claws, giant armored body, and a penchant for eating PCs.

That's the only noteworthy part of this section, and the author suggests that "The Screaming Woods are a good location for ruins of your own design."  He's right.

The Giant Ant Colony
This here is the meat of the module, comprising 9 pages of material.

There are 3 ways to deal with the menace of the mutant bugs:  kill 'em slow by slogging through the nest, negotiate a deal on behalf of the farmers, or kill 'em fast with an explosion (caused by unearthing tech in the sublevel buried beneath the mound, which also corresponds to the ruins above).  The first option would be a grind, as the mound is 7 levels deep, and there are a LOT of ants.

I like the second method, if for no other reason than this flavor text:  "[The Queen] loves her children, but would like someone or something to engage her on an intellectual level."  That just tickles me to no end.

But I'm not sure what I think of the "dungeon" itself.  Boy howdy, did I mention there a lot of ants?  Each level has some stuff to jazz it up the unabashed antliness—a buried Ancient tank, a "crafty giant gecko...[that] for some strange reason, the ants ignore or tolerate", aphids, a dismembered android, cockroaches, 2 spider-bots guardians—but it's a sure-fire ant-fest.  Obvious, I know, but...shrug.  Maybe I'd make them purple.

And that crafty gecko?  I'd TOTALLY make him the Ant Queen's personal assassin who disposes of ants that gain sentience and get all uppity.  Play him as debonair and suave and dangerous, too.

Oh!  Lest I forget, there is a level with some contaminated water and fungus and crystals and such...and it's home to a hilariously grody / grodily hilarious flock of monsters called pus bats, which are white, foot-long blobs that wetly hang from the ceiling...then jump on victims below!  That visual is just disgusting, and I'd gleefully spring them on PCs.  I love pus bats.

One thing that I really liked is McGrew's use of the descriptor "Oldways"—Oldways coins, Oldways weapons, etc.—instead of the typical "Ancient" adjective.  It's a small thing, but I don't think I've ever seen that term used before in post-apocalyptic materials, and I'll definitely use it.

The maps are just dandy, too.

And any module that lists a lone "girlie mag" in a treasure haul is a-okay with me. 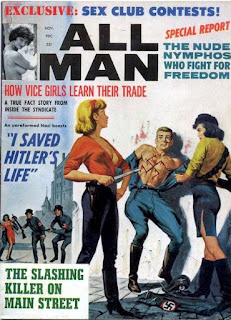 But there are some issues with the work.  Primarily, it needs some serious editing, as there are too many spelling and grammar mistakes (mainly a criminal misuse of commas) for my sensibilities.  And I'm not sure if the supplement is...hurm, how do I phrase this...Mutant Future-y enough?...for my liking.  The farm has plenty of mutant animals, but they're scenery.  And except for T.H.S.M. ladymonster, there's a general "tameness" to the other encounters—giant bug, giant bug, giant lizard, giant bug, token robot, giant bug, giant bug, etc.

This is the inevitable part where the word "gonzo" gets thrown around, but that way lies madness given how each post-apocalyptic fan has their own baseline.  Personally, I'd bump up the mutant-ness and the future-ness.

The farm setting has potential, too, as a PC base of operations or Shangri-la for migrant tribes, but it's a bit too bucolic for me.  I likes my settings full of rubble and radiation and reactors.  (Huh.  Ruins & Radiation would make a swell little title for a post-apocalyptic game....)

And there must be something in the water, because this is the second supplement I've run across in the last year with an ant mound for a dungeon.  You may have heard me mention the other before.

My overall stance on Menace From The Wasteland is that there's some gold nuggets buried in the anthill, and any Mutant Lord worth his salt can buff 'em and shine 'em into something worthwhile.  But as-is, it's a little colorless.

I'd still recommend it, though, if you want a pre-fab sandbox of a more tame nature.  And I look forward to Mr. McGrew's [mutant?] future projects.

—
You can purchase the PDF here.
—

[Note:  I've been working on this review for a few days, but by utter coincidence, I just noticed an alert from RPGNow that MFTW has a revision awaiting download.  As I've only read the initial version, I have no idea what's been updated.  Maybe the aforementioned errors...?]