The Guys Of Wrexus Are Upon You — Meet Exxon The Eternal! 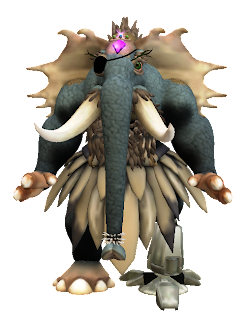 
) Studded Leather Armor (AC 6)
) All The Money
) GOONS!
) An Entire City At His Disposal
) As-Needed Mobster Arsenal and Accoutrements

Description
Exxon Honda's been chopped, shot, stabbed, and blasted, but seemingly nothing can stop the 10' tall, semi-shaggy, half-ton-plus pachyder-man.  And losing both his right eye and left leg did little but piss him off.

Through brawn, drive, and seeming invincibility [thanks to that solar-healing and increased HP], Honda climbed the ranks of Gunspoint's organized crime...until violently claiming the throne for himself.    His army of enforcers, smugglers, scroungers, and assorted lowlifes serve his every whim.  Exxon Honda is Gunspoint, for all intents and purposes.

Honda's ruthless and brutal, but not without charm and a dark sense of humor.  He often takes a shine to his favorite employees, and offers them access to the finest munitions and equipment...but he also demands repayment for every discharged slug and expended energy charge (usually after the fact...and usually at rates that surpass salary agreements).  Many find that they can never escape their debts, and end up working for him forever....

While Honda tries to maintain a veneer of the utmost professionalism and practicality, he's been known to squash—literally—incompetent and problematic employees.  (You can tell when he's getting irritated, as his big ears start twitching.)  And Honda would move heaven and earth to get his trunk around the bony throat of rival crimelord Don Esqueleto, the translucent mutant who maimed him.

"By Honda's metal foot!" is a common epithet amongst Gunspoint's denizens.  It's just never said too loudly. 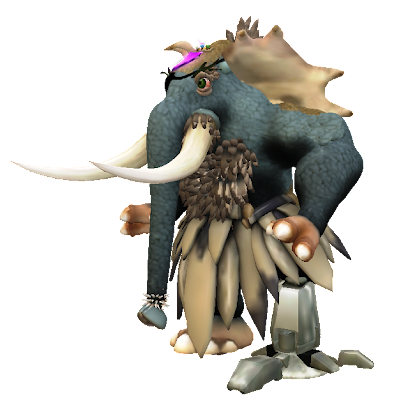 Designer's Notes:  In the campaign's very first adventure, I quickly needed a Wilson Fisk / Jabba The Hutt type to goad the PCs to action...and made up the name and description ("an elephant-dude with an eye-patch and prosthetic leg") on the fly.  But over the last few sessions, Honda's shadow over the characters grew larger, and it was high time to stat him up.

I randomly roll up my NPCs (3d6 in order, random mutations...if it's good for the players, it's good for the Mutant Lord), and I swear on a drum of toxic waste that the stats above are 110% legit.  Just look at that ridiculous STR and CHA (natural 18s!), 17 WIL, double HP, super-moolah skills, and awesome damage-dodging abilities.  Even the Reduced Vision Drawback paid off, due to that aforementioned patch at all.  And in making him Lvl 5, I randomly used the advancement chart, too...and earned a +1 STR, +1 INT, and +2 attacks per round in the process.

Beastly!  The PCs are going to HATE this guy, if they ever come to blows.