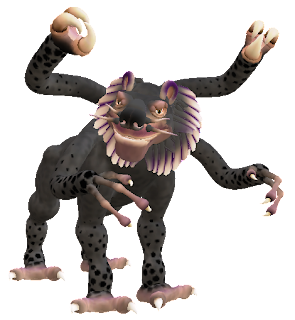 Catermauls are large, tail-less felines that inhabit savannahs, forests, jungles, and Ancient ruins.  Their coloration ranges from jet black to tan to tawny gold, and dark spots fleck their fur.  Their tracks are distinctive, due to their unusual feet.  Male catermauls have prominent manes.

Each catermaul has four tentacular limbs sprouting from its backside—one pair ends in manipulative digits (useful for opening doors, pulling levers, etc.), and the other in hooked claws, snapping pincers, serrated spurs, or the like.  Though lacking the strength to handle any weapons heavier than daggers, their fingered hands are extremely nimble and skilled at delicate tasks, like picking locks or disarming boobytraps (70% success rate).  [The Mutant Lord should ensure that each catermaul's appendages are unique in appearance, while maintaining the 2 "hands"/2 "claws" ratio.]

In addition to being incredibly stealthy (Surprising on a roll of 1-4 on 1d6), catermauls are cruelly devious and treacherous.  They prowl villages at night, and break into residences to devour the slumbering occupants.  They can also mimic human voices, to better lure unsuspecting prey into ambushes.

Caterwauls relish the taste of Ancient processed meat-snacks (which are still edible in the Mutant Future) almost as much as live prey...and they always keep their word if jerkies are involved. 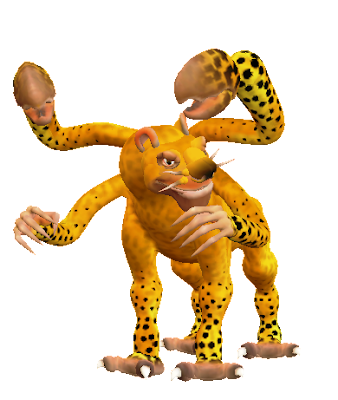