The Guys Of Wrexus Are Upon You — Meet The Notorious B.O.T.! 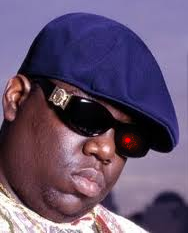 Attacks / Weapons / Abilities
)  2 attacks per round

The Ancients were awash in mass-media-driven "celebrity culture", but the concept lost all meaning as anyone with an implant-cam and a cerebro-link instantaneously broadcasted their antics throughout the known worlds.  The Hollywood-Military complex couldn't profit from these "independent artists" the way they did in the glory days of contractually-bound entertainers, so The Powers That Be literally made celebrities of their own...or, more accurately, re-made them.  They cloned and robotized and digitized long-dead stars of stage, screen, song, and stadium into programmable, controllable cyber-chattel.

The Notorious B.O.T. (a.k.a. BIG*E) is one such construct, a portly fabricant as deadly with a rhyme as he is a blade.  He awoke angry and ambitious from the celebri-storage tanks beneath The Syn-Hell Pavilion (an accursed prison-slash-graveyard for Ancient artificial beings), and he's obsessed with reforging his musical empire.  Thanks to exhaustive data-chips on Ancient chemistry, The Notorious B.O.T. subsidizes his endeavors by dealing in rare pharmaceuticals.

In combat, BIG*E usually lumbers into melee, cutting down the weak and the wack alike.  He also manipulates deadly sonic waves (Energy Ray, Killing Sphere), and launches narcotic finger-syringes (Toxic Weapon) up to 30'.  Though he strives to maintain a pristine appearance, his synthe-skin is often battered and tattered from hard living.  BIG*E abhors primitive firearms, and single-mindedly attacks (Morale 12) anyone who points one his way. 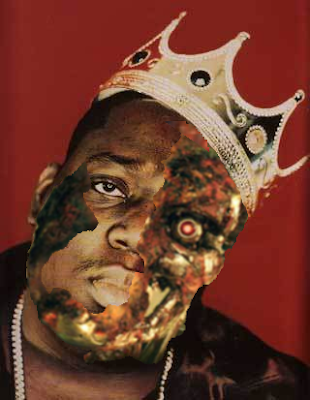