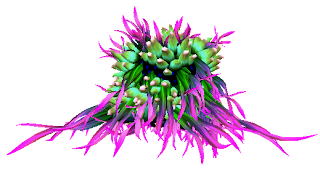 Skorals are levitating colonies of bioluminescent, hard-shelled microorganisms that float languidly across the skies of the Mutant Future.  They vary in size range in size from 20' long (13 HD) to over 50' long (20 HD) to several miles long (35+ HD).

Skorals are rarely a danger to ground-based targets, as they soar at high altitudes to feed on insects, birds, and assorted flying mutants.  Any animal that bumps into a "sky reef" is either electrocuted or pierced with poisonous barbed tentacles (1d6 damage, Class 15 poison).  Skorals can also discharge clouds of pheromones to mesmerize prey that would otherwise avoid them.

Attacking skorals from the ground is foolhardy, as it will  cause the colonies to float down and attack, lashing out with hundreds of whip-like tentacles.  And killing a skoral reef is even worse, as a dead mass of large enough size can crush an entire city.

Skoral clusters are completely immune to all Mental Attacks.  Smaller specimens are favored prey item of quakewhales (who build up a resistance to skoral toxin as they age).