While I generally try to keep things on the radioactive-n-mutalicious side of the post-apocalyptic spectrum for this here blog, zombageddons certainly come close enough to count.

Cross-posted from my more monster-centric musings over at The Haunted Spookshow Of Channel X. 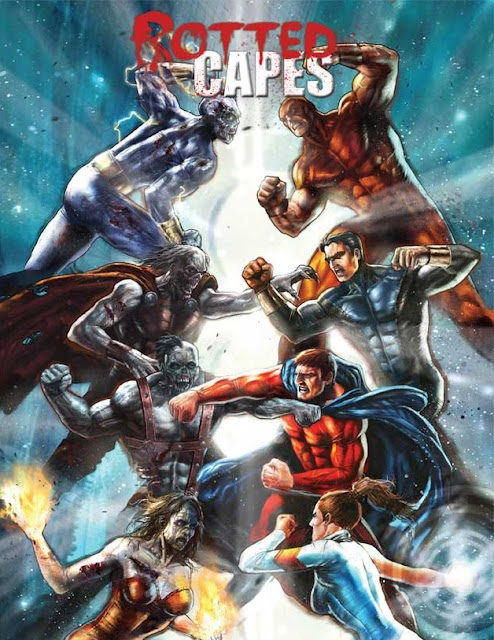 If you buy me a beer and have a few spare hours you'll definitely wish you could get back, I'll wax necrophilic about how and why zombies became the pop-cultural juggernaut of the new millennium.

Funnybooks certainly get their due in my sermon, and definite credit / blame goes towards the insanely popular—and wholly disgusting—Marvel Zombies franchise.

Starting in 2005 (and years late to the undead zeitgeist shindig, as is Marvel Editorial's wont), Marvel Zombies involves a necrotic infection that turns Marvel's good guys into intelligence-retaining-but-now-malevolent ghouls that devour and / or corrupt all life on Earth... and beyond.

Over the last decade, Marvel's published about a dozen assorted mini-series starring the superhuman shamblers, and they're still going strong.

It's only natural that RPGs jumped on the bandwagon, which brings us to Paradigm Concepts' Rotted Capes.  I Kickstarted the rulebook over two years ago, and glanced at it and put it on the shelf.  But I just finished a zombies-n-supers novel (Ex-Heroes), and got in the mood for more gore-n-spandex.

Time to revisit the game!

Rotted Capes takes place after a devastating zombocalypse ("Z-Day") and puts the players in the roles of the B-Listers:  the sidekicks, the street-heroes, the has-beens, the never-weres, and the low-rent villains.  All the A-Listers and assorted big guns got devoured by the ghouls... or worse, transformed into them.

There are no more cities proper to protect, so the B-Listers' duties include establishing hideouts, defending survivors, scavenging for supplies, and avoiding being eaten (which means fleeing, more often than not).

Rotted Capes combines superheroics and survival horror and post-apocalyptic gaming into one package...

...which means it's pretty much Necessary Evil, using zombies instead of aliens.

Being based on comics and all, I'll start with the art.  Rotted Capes has some evocative images that capture the right mix of grody and heroic.  Groderoic? 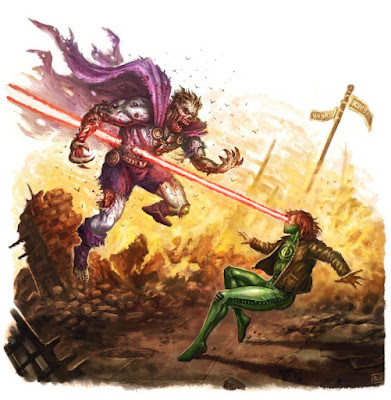 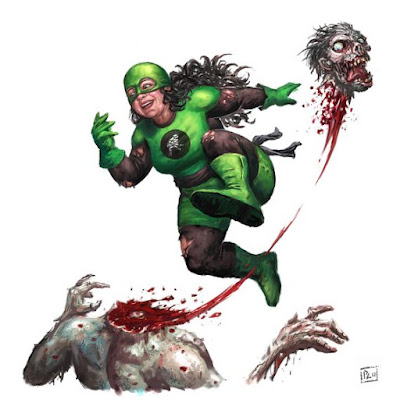 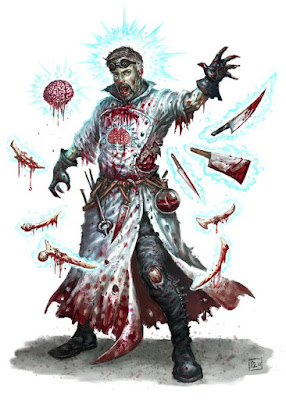 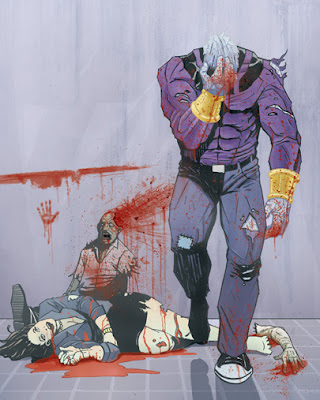 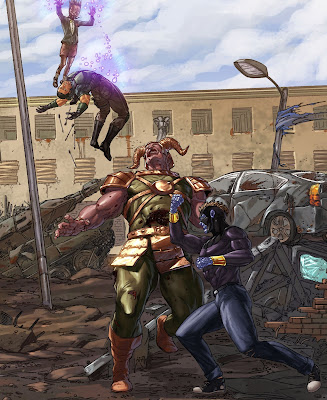 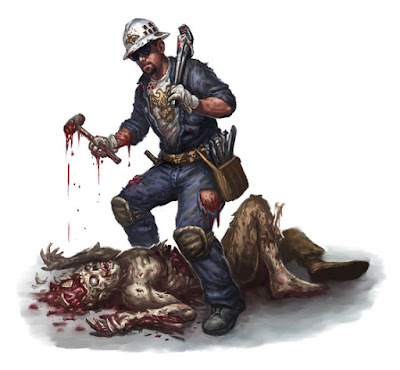 I dig it.  Gets me in the mood to serve up some two-fisted, brain-pulping justice!

The cover of the Limited Edition version of the book is pretty cool, too...

...but it's obvious some serious Swipe File'n went down.

Here they are again, side by side:

The core system involves your standard "beat the Target Number" mechanic.  Roll 2d10 (the Action Dice), then add the relevant Attribute Die, then add modifiers from Combat Maneuvers and Skills and Tricks and whatever, and exceed the baseline.  There are Exploding Dice and Criticals and Bumps and Penalties that modify the grand total.

It's cumbersome, but not complicated.

Rotted Capes uses a buy-build system, and intro B-Lister characters start at 150 points.  Other tiers include the more proficient Beta characters at 300, plus the opposing A-Listers at 600, Omegas at 1200, and Cosmics at 2400.

That scale is terrifying, and really drives home the scrawniness and out-classed-ness of the PCs. But I'm totally down with that, because plenty of My Very Favorite Comic Characters score high on the Mort-o-meter.

Then you pick an Archetype (Blaster, Brawler, etc.).  Not only does your Archetype yield more Attribute Bonuses, but it also indicates what Primary Powers you can get at a reduced cost.  If you're, say, a Heavy, you can buy Growth cheaper than an Infiltrator can, while an Infiltrator gets Illusion cheaper than a Heavy.

B-Listers are supposed to have only a handful of Powers, to really represent their underdog statuses; points-wise, three seems about the doable maximum.

Then you pick Disadvantages, which are physical disabilities that provide more build points.

After that you have to choose at least one Personality Flaw (Darwinist, Haunted By Nightmares, Villainous Past, etc.), which when triggered, provides Fate Chips Plot Dice to alter outcomes in game play.

Then you pick a Tagline ("It's clobberin' time!"), which allows further manipulation of Plot Dice when bellowed on the battlefield

FINALLY, you get to spend some points, starting with Attributes (and the corresponding Derived Attributes), then Skills (which come in bulk discount if you buy Skill Sets, like Athlete, Detective, etc.), then Advantages (Attractive, Martial Artist, Rapid Draw, etc.), then Powers (almost all the usual in some form or fashion, with "weather control" conspicuously absent).  Attributes, Skills, and Powers are all purchased by the Rank, at an escalating scale:  Rank 1 costs 1 point, 2 costs 1+2 points, 3 costs 1+2+3 points, and so on.


After that comes Power Modifications (tweaks that make Powers more or less, uh, powerful, and correspondingly more or less expensive), and Gear (weapons, armor, batteries(!), etc.) rounds out the process.

In conclusion, char-gen is a hot fucking mess.

The step-by-step character guide lists eleven parts, but there are actually twelve... and the steps don't jibe with the order of the book's contents.  Commence copious page-flipping.

And the rules describe numerical bonuses and costs pertaining to concepts before defining said concepts.  Take Attributes.  The "choose your Power Source and Archetype" phases both make key notations to Attribute Bonuses, but you don't know what the Attributes are or do until 10 pages later.

Then there's the Ranks.  Trying to figure out how much, well, anything ultimately costs is a nightmare, especially when incorporating the assorted Power Source bonuses and Power Modification discounts / penalties.

I'm no rookie when it comes to point-buy games, having played Champions / HERO System pretty much non-stop since 5th Grade, with meanderings into Mutants & Masterminds and World Of Darkness and Savage Worlds along the way.  I grok building my own characters.

But with Rotted Capes, trying to build what is essentially the simplest PC possible—a Tech Hero in a no-frills bird suit—took me two evenings and over six hours total, and I had ZERO confidence I actually did it right.

I even tried comparing my character to the sample NPCs in the back, but the numbers didn't sync up. So that led me to writing out a few of the NPCs in longhand, trying to reverse-engineer them... and after copious crumbled pages of notebook paper, I'm 99% certain that the designers' math is wrong on their own damned characters.  And there's absolutely no way to verify which of us screwed up, as the official write-ups don't break down how the numbers shake out.

I wanted to hurl the rulebook across the room.

I ultimately scrapped the Tech Hero version of my flying-guy—fer Mephisto's sake, THAT'S ALL HE DOES!!!—and worked him out as a Super-Human.  Things seemingly fell into place then, but I'm still sore that I didn't get to make the character as conceived.

After character creation, there's eighteen pages of combat rules, with damage and stunts and status conditions and vehicle crashes and the like.

The key timing mechanism is The Clock, which is a Frankenstein'd combination of basic "rolling for Initiative", HERO's Speed Chart, and Savage Worlds' card countdown.

I'm so irked at Rotted Capes' char-gen that I can't give proper attention the combat section. I have zero clue if the system works, but my gut tells me it's unreasonably clunky, because of stuff like Actions breaking down into four speed categories: Trivial, Simple, Complex, and Ehhhhhh, Who The Fuck Cares, Because I'll Never Use These Rules As Written, What With Them Being So Terrible And All.

Oh, yeah—there's Burnout, which is when powers shut down from exhaustion, leaving the PC in the lurch.  Tech-based characters seem particularly susceptible to Burnout, and it looks about as fun to play with as Encumbrance in D&D.  At least everything resets after each scene (which is appropriate, modeling the "recharge effect" that happens between comic panels).


As lousy as the first half of Rotted Capes is—and, boy howdy, is it lousy—there's great stuff in the Game Master Editor-In-Chief section.

Rudimentary survival is key in all artworks of zombiedom, and the book details all the important hazards:  contaminated eats, diseases, starvation-n-dehydration, animals (domestic, wild, and "escapees"), survivors (antagonistic and otherwise)...

For those lacking imaginations and / or windows to the outside world, there's a sample setting (Paradigm City—sigh) with an extensive (but stat-less, which is totally okay) Who's Who that hits all the standard comic beats.

Perhaps most interesting is the section on building an Enclave, the little hold-out of humanity your B-Listers protect.  It almost reads like a mini-game, with figuring out logistics for encampments, defenses, caravans, governments, laws, entertainments (now with bloodsports!), and agriculture.

Anyone remember Gamma World 6e, with the mechanics for PCs to actively design their community's philosophy, size, manufacturing, etc.?  Enclaves are like that in spirit, but without the crunch.

Enclaves bring novelty and a unique vibe to tabletop superheroics, and that's dandy for this jaded GM.

There's also suggestions of incorporating comic book tropes, such as Drama, Flashbacks, and Issues (as in "very special episode" fodder, not individual comics themselves) into the game.

I totally love the Flashbacks, and would use them in any Rotted Capes session I ran.  Like, do a scenario with a zombie villain, then "flashback" to a pre-apocalypse combat with the PCs and the same baddie.  Play it out and everything to establish the history and relationships, then jump back to the zombified present.  Flashbacks cater to my GM-ing style, and I'd use them with abandon.

Oh—one more thing about Enclaves.  They bring me back full circle to the novel Ex-Heroes, which prompted this whole review.   The tale goes into great detail about the hassles—supply raids, shoring up defenses, illnesses, roving gangs, boredom—inherent in superheroes keeping "normals" safe from flesh-rending hordes.  Ex-Heroes came out in 2010, and it's clear the Rotted Capes crew were inspired by the novel.

That's not a dig, by the way; just noting that the influences run deep.

The book wraps up with the handful of math-sloppy NPCs I lamented above.  Almost every Archetype is represented, and the characters are either quirky or lame, with no middle ground.  For every La Pulga ("The Flea" in Español!) and One-Man Mob there's a Shank and a Transporter.  I don't fault the book's writers, though, because the characters were created by the Kickstarter's top donors.

Like the zombie comics it seeks to emulate, Rotted Capes is a cool costume over a rotten husk. I'd take everything in the Editor-In-Chief section and convert it to another ruleset.  Savage Worlds (quelle surprise!) seems ideal, because Necessary Evil does the legwork for this exact kind of game.

I'd also love to try FASERIP and play in the Unofficial Official Marvel Universe, just for nostalgia's sake.  That'd be a hoot, converting characters into their ghoulified incarnations.

Hell, I'd even use Champions, and that's a huge freakin' deal because I swore off running it.  [If I had to describe my current relationship with the HERO System, it'd be: "we're seeing other people".]

What I'm saying is, that in spite of itself,  I really, Really, REALLY like Rotted Capes, y'all.

If you're gonna hunt it down, the PDF is theoretically cheaper than a hardcopy, but certain online retailers have it discounted enough that the prices even out.

Final Review Score:  3 Hovering Headpools out of 5 (but it probably deserves only 2.5).