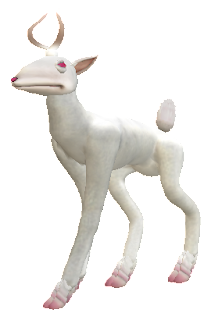 
With its snow-white fur and glowing pink eyes, the sleek, graceful albilope stands out on the plains of the Mutant Future...but don't mistake it for easy prey.  An albilope's foot-long, y-shaped, serrated horn delivers wicked injuries that inflict an additional automatic 1d4 damage each round due to excessive bleeding (which can be stanched with proper first aid).  And while they usually feed on vegetation, albilopes viciously chase down and devour vulnerable targets.

Albilopes are thought to be the first creatures to evolve an immunity the Vampiric Field [see p. 31 of the Mutant Future Core Rules] Mental Mutation.  [Anti-Vampirism actually induces the Albinism Disability in its possessor.] 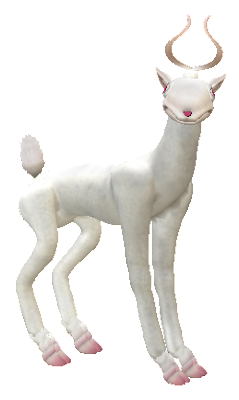 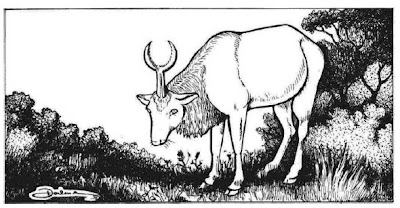 Not-The-Designer's Notes:  The Albilope appeared in 1982's Famine In Far-Go, which was designed by Michael Price, and developed by Price and Michael J. Richie.  Illustration provided by the enigmatic Darlene.

Not-The-Designer's Notes Addendum:  The original text from FIF-G described the Albilope as being slender...yet the resulting picture made it look like a husky caribou.  I went with sleeker, daintier, and un-shaggier for my version.  Furthermore, I just made it completely immune to radiation, instead of the complicated "double its effective CON against radiation" from the source material.