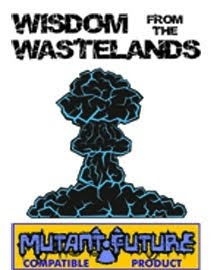 I planned for this review to be up last Tuesday, making it waaaaayyyy late.  (And I'm running behind on the rest of the WftWs, too, because they're up to #12 as of now).

My apologies, Skirmisher Gang.  I'll be getting caught up wit' a quickness.

As a young GM, I really didn't appreciate—as in "grasp the awesomeness thereof"—the open-endedness of certain aspects of my favorite games.  Take Gamma World 2e, and the mutation Planar Travel.  Usable once per week, it read:

Character can make a 3-meter square door into alternate plane of existence anywhere within range. Opening lasts for 30 seconds.  Plane into which opening faces is randomly determined and there are billions of such planes.  Anyone moving through this opening will never find his way back to his own plane.

That description just freaked me out.  The players could run amok!  They could leave the entire Gamma World setting behind!  They could ruin my campaign!  What was I supposed to do if someone actually rolled that mutation...and, even worse, used it?!!!!

I'm feeling much better now.  I get it.  And Wisdom From The Wastelands #7: Planar Creatures & Concepts goes above and beyond to mollify my panicked inner 10-year old (who annoyingly rears his li'l ol' head from time to time) because it's just chock full o' inspiring bits.

In a delightful bit of understatement, author Derek Holland opens with the line, "One mutation that could greatly influence a campaign setting and its population is 'plane shift'."  And in the most ambitious issue of the weekly series so far, WftW #7: Planar Creatures & Concepts presents a myriad of ways to "greatly influence" your campaign world.

The word "impressive" doesn't do it justice.

The bestiary offers the following:

) Broken Seals:  ornery, acid-dripping pinnipeds that 'port over, and then just flop around in agony as they dehydrate to death, dissolving everything around them...and making 300' deep pits in the process.  Horrifying, tragic, and gross.  (And I've already established that I'm a sucker for flippered mutants.)

) Brooms Of Doom:  freaky, gigantic, The Mist-ian predators that float about like sky-jellyfish and gobble you up with their sting-tendrils.

) Hairy Stars:  vibrantly colored, 30' diameter, super-fast, poisonous starfish that are more arachnid than echinoderm.  Awesome, and I would use these in a heartbeat (but probably rechristen them "Spiderstars" or something similar, just to fit in with my own naming whims).

) Zanders:  Like D&D's own piercers, but arboreal, and pheromone-based.  Much cooler than their progenitors.

Of the 19 new mutations, some standouts include:

) Chemical Gland:  Lets your mutant secrete a useful (note that operative word) chemical.  Takes the standard Toxic Weapon mutation and cranks it to 11.

) Restore Life:  Resurrects a subject (whether they want it or not) for 36 hours.

) Summon Ghost:  "The mutant can bring forth a dead creature's memories as a phantom."  Fun.

) Wormhole:  Super-teleport that can crush your foes within, if you're feeling just plain mean.

Post-apocalyptic wastelands are built on "strange radiations", and here's 10 to give your own Mutant Future a fancy new flavor.  Just think of all the mayhem your PCs can unleash with these!

) Biocide:  Save Versus Death, indeed.

) Magic:  Ok, this one is kinda lazy.  But it's a genre staple, particularly in our hobby.

) Mental Parasites:  All-encompassing "invaders from beyond" that get all up in yo' stuff. 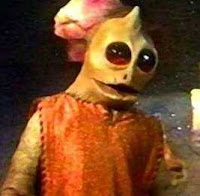 ) Transformation:  The mush-pot.  Anything goes!

) Translocation:  Teleporters.  Man, these are really running out of steam.

In past reviews of Skirmisher's Wisdom... materials, I've griped that they sometimes just do "too much".  That they fill in "too many blanks" that may be better left unfilled.  That they go overboard with a concept and don't let it breathe.

And reading over this particular issue, it finally clicked what was needling at me:  I sometimes have the same feelings as when I'm reading a modern era HERO System product.

I have a 3-decade history with HERO, and in recent years, the game has both bloated AND had all its lifeblood drained out.  (Lucha Libre HERO is the only thing with any magic written in the last half-decade.)  The modern Hero is dry and dusty and dull, but also completely, utterly thorough in its dry, dusty, dullness.

So, when I'm reading through, say, 19 new mutations from the most recent WftW, my gut reaction is frequently, "Do we really NEED that?"  And I have HERO System flashbacks, and I chafe.

But that's not entirely fair to the Skirmisher Gang, and just because I've gotten more minimalistic in my approach doesn't mean others won't find all the "extra toppings" useful and welcome.

In conclusion:  WftW #7: Planar Creatures & Concepts is ambitious, creative, and delivers more bang for your gaming 99¢ than almost anything else out there.