Zapwidows are spiky, 5'-tall-at-the-shoulder arachnids that lurk in overgrown forests and areas rife with mutant vegetation.  They spin enormous webs (often exceeding 180' in diameter) to trap prey...but also truss up victims stunned by their electricity-generating abilities.  Escaping zapwidow webbing requires an Ability Check Versus Strength at a +2 penalty.

Excepting illusion-based attacks, zapwidows are immune to all other forms of mental combat. 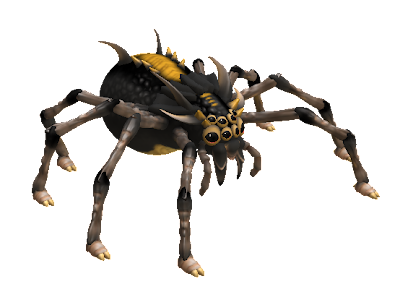 Designer's Notes (or Not-The-Designer's Notes, as the case may be):  This is my tribute to the Blackun ("Attercop"), which first appeared in the 1983 2nd edition of Gamma World by James Ward, Gary Jaquet, and David James Ritchie.

But I changed the name (simply never liked the original), so I don't feel right calling it a straight-up Gamma World conversion...though it will read so in the tags.

And here's the original graphic... 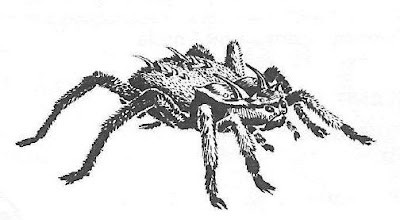