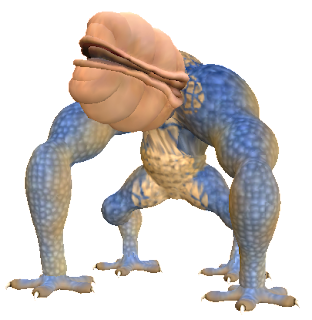 
Oystalkers are carnivorous mollusks that stand 4' tall at the shoulder and weigh between 100-150 pounds.  Descended from aquatic bivalves, oystalkers fully adapted to life on land by evolving quadrupedal, rubbery, ape-like bodies that extrude from their heavy, shelled "heads".  All vital organs are contained within these shells.  They lack eyes proper, but instead possess highly-developed senses attuned to movement and changes in light/brightness.

Oystalkers are found in all but the hottest and coldest environments, and they are tenacious pack hunters.  Quick and agile, they bound after prey with slashing claws and clamping jaws.  A successful bite means the oystalker latches onto its target, doing continual claw and bite damage each round until it or the victim is dead.  To break an oystalker's vise-like grip, one must have (at least) two free hands, and then make an Ability Check Versus Strength [per p. 51 of the Mutant Future Core Rules] with a +4 penalty modifier.  Attempts to pry open an oystalker's jaws can be made each round, but all damage is applied beforehand.

Oystalkers lack skeletons; instead, their frames are supported by a combination of raw muscle and fluid pressure.  And thanks to their shells and sinewy bodies, they are highly resistant to harm, taking only half damage from conventional weapons and firearms.  They are also immune to all damage/effects from crushing and/or falling.

There is a 35% chance that an oystalker's shell will contain 1d6x100 GP worth of pearlized remnants (skulls and/or bones) of prior prey.  There is a 10% that such remains will be of the rare "black pearl" variety, worth 1d6x1000 GP. 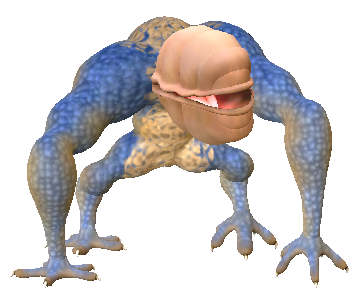