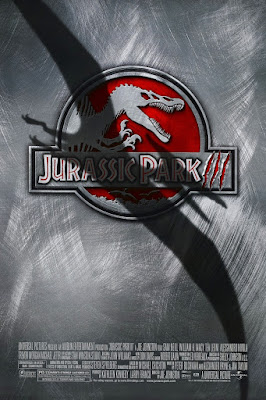 It should come as no surprise that I'm excited for Jurassic World.

Yes, the trailers are obnoxious in their video game-y effects, and I can't think of a single Bryce Dallas Howard flick I've enjoyed.

In preparation for this surefire blockbuster that can in no way, shape, or form shatter my fragile heart beneath crushing disappointment, I've spent the week re-watching the original JP trilogy so I won't miss any nuances.

The Lost World: Jurassic Park (1997) is hot garbage.  Yet I've mellowed—and trust me, no one is more surprised than me—on the flick, as it no longer fills me with seething, blistering vitriol; hell, it's even demoted from my Top Five Most Reviled Films list.

But what about the much-maligned Jurassic Park III (2001)?  Not only is it better than I remembered, it's interesting enough to revisit with a rambling quasi-review fourteen (!) years after the fact, particularly in the context of this here blog.

The Setup:  Jurassic Park III begins with a pretty flimsy premise:  obscenely wealthy, extreme (in the Mountain Dew-ian sense of the term) vacationers Paul and Amanda Kirby want to do a fly-by of The Isle Of Dread Pellucidar The Savage Land Isla Sorna (evil dino-company InGen's secret breeding ground for bioengineered beastes, as revealed in TLW:JP) for a photo safari, and need the chronically under-funded and ever-chapeau'd Dr. Alan Grant to give them aerial commentary on any fauna they spot.

Grant wants nothing of it, however, because of his aversion to being devoured.

But money talks, and Grant believes the Kirbys when they insist they'll pay any sum, and swear they will never, ever, Ever, EVER land on the island,.

So he and his pretty-boy assistant agree to the trip...

...which proves problematic because Paul and Amanda are bald-faced liars.


Nope, the Kirbys aren't wastrel billionaires; instead, they're hardware-store-owning schmucks who happen to be divorced (AWKWARD), and team up again (in spectacularly awful fashion) to find their kid, who just so happened to go missing months ago on dino-island via a parasailing accident with Mama's new beau.

In other words, they're the freaking Van Houtens.

Dr. Grant comes across pretty terribly in this sequence.  I mean, I realize that this is a movie from the World Wide Web wasteland of 2001 and "Google" didn't become a verb until 2006, but everybody knows you investigate your employer(s)...


...particularly if they look like doomed grifters straight from a Tarantino movie.


The Action:  Of course, they land.  Cue thundery, lizardy hijinks.

They eventually find the missing kid (because, Spielberg), and wonder of wonders, he doesn't suck.


He hides out in a wrecked ATV.

He scavenges the InGen ruins for eats, weapons (like gas grenades), and tools.

And, best of all, he isn't whiny.  Kid's made of pretty resourceful, stern stuff.  He even keeps jars of tyrannosaurus urine around to scare away the smaller predators.

All things considered, Kid Kirby is the only competent person on the whole damned island.


The Setpieces:  There's some doozies.  My favorite involves a crazy aviary.

I've been a sucker for pterano-related mayhem since I saw The People That Time Forgot in 1977 as a wee one, so this bit was a hoot AND a holler.

It's suspenseful as hell, and shows that even man-sized-ish, hollow-boned dinos are a legitimate threat.


The Kid even gets dropped into a nest chock full o' babies, and they do their damnedest to gobble him to death.

And because I'm a terrible person, I laughed.

And though Kirby Junior survives his ordeal, Pretty Boy does not.  He gets hammered and bludgeoned and drowned and pecked to death.  It's a bad way to go.


Another neat sequence involves midnight dino-piracy in the rain.


When watching the Jurassic Park franchise back to back, it's obvious the production crews had a fondness for combining inclement weather, darkness, and monster attacks.  I can't decide if it's a budgetary thang to skimp on FX, or a way to mask clumsy animatronics, or just a case of "the audience liked it before, so ...."


Hurm.  With the misty aviary and the midnight boat ride, there sure is a lot of "fog of war" in JPIII.

And, obviously, there's Mandatory Fun With Velociraptors.  They're essential to the series.

The Stars:  All that said, Jurassic Park III excels when it comes to the entire reason for watching in the first place:  the dinosaurs.

The first two installments focused on the creatures' grandeur and power and capacity to terrify, and chronicled how the humans reacted to them.  But in JPIII, there's a new-found intimacy with the beasts, and plenty of attention paid to how they respond to the humans. 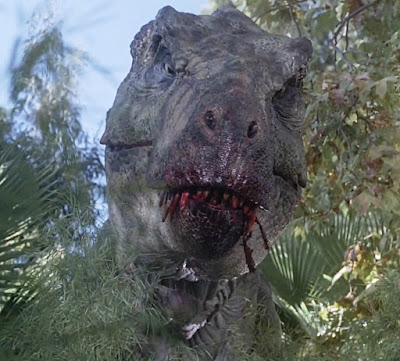 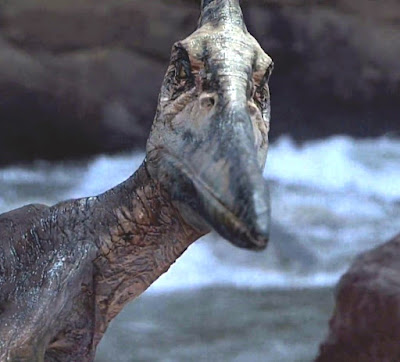 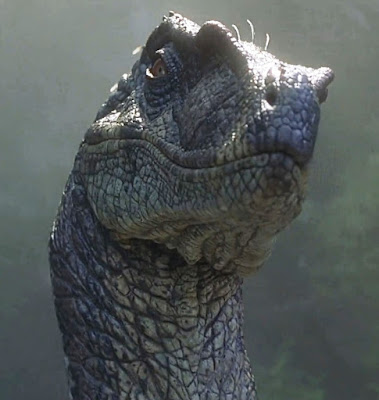 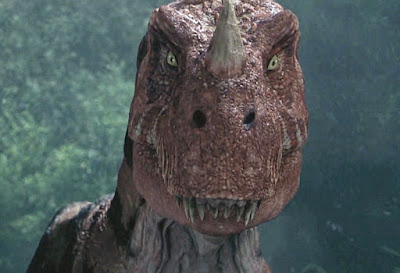 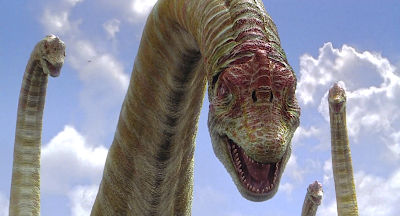 And this little scene, where the protagonists do a collective slow turn to see what terror's behind them, ripped a surprise guffaw right from me because it's obvious what that spinosaurus is thinking:


Sure, there's a lamentable over-reliance on CGI instead of practical effects and puppetry, but the dinosaurs generally work.

Speaking of puppets, one raptor in particular brought a certain favorite felty fiend to mind.

Women haven't been well served by the Jurassic Park franchise, and you'd think it impossible to find a character more inept than The Lost World's stone-stupid "wildlife expert", Sarah Harding (she of the "only there to document and record, but gotta first pet this here hatchling and almost get bludgeoned to death in the process" and "running around a carnivore-filled jungle bathed in the blood of a baby T-Rex" fame, a thankless role portrayed by Julianne Moore).

But you'd be wrong, as Leoni's Amanda Kirby is The Worst.

She's shrill, obstinate, and—most egregious of all—oblivious, and the direct cause of 99% of the reptile-related havoc that befalls our protagonists.


She's solely responsible for stranding the group on the island.

She gets half the cast devoured, and loses the only satellite phone in the process.

And she consequently creates and unleashes nothing less than JP's version of Tick-Tock, cinema's saurian stalker supreme.

And because Amanda's a parent in a Spielberg movie, you're supposed to root for her, and savor her triumphs.  Like finding her son, repairing her broken marriage, and, you know, not dying.

But not a single victory is earned...

...and the one thing she does deserve doesn't happen.

And the movie is the lesser for it.

PS:  She also looks like my first ex-girlfriend.  No good comes of that.


But Wait, There's More:  There are some other major problems, like Dr. Grant communing with the dinosaurs.

Remember that pic at the top, where he's holding what looks like a horrifying marital aid? Turns out it's a model of a "skull resonance chamber" that allows the wielder to speak fluent Raptese.

Yeah, Grant totally Zamfirs away a pack of pissed-off velociraptors.  They telegraphed it in the first ten minutes of the movie, and it's corny as hell.  I remember the audience's collective groan when I saw it in the theater way back when.

Another thing:  the movie doesn't so much end as come to an abrupt, nonsensical halt with a convenient military rescue.

It's like they ran out of money and just slapped on an ending with extras from an adjoining set.

Oh, and during said rescue?  Turns out Pretty Boy is alive, and somehow already safe and bandaged on a transport.  It's totally out of left field and completely insipid.

One last thing:  the music is utterly forgettable.  Jurassic Park gave us a sweeping, epic John Williams score that was as much a character as the actors themselves, but JPIII's composer Don Davis doesn't have the chops.  He does all right with the action bits, but overall, the soundtrack is sorely lacking...and big chunks are just reused from the prior movies.


RPG Relevance:  Jurassic Park III is the Platonic Ideal of a Tabletop Game Session Ported To The Silver Screen.

I mean, you just can't get more elegant in role-playing simplicity than "the party is trapped on a ruin-laden, monster-infested island with nothing but their wits and scavenged equipment to save them".

Just look at the place! 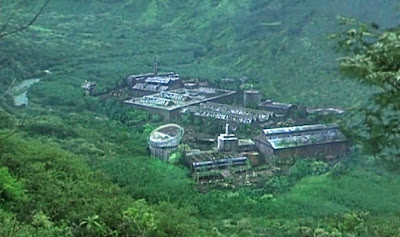 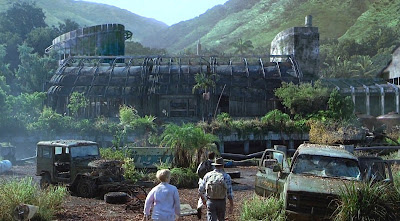 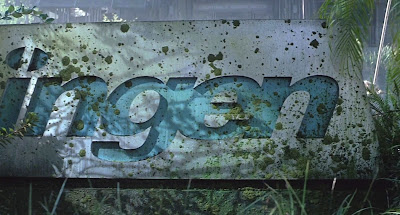 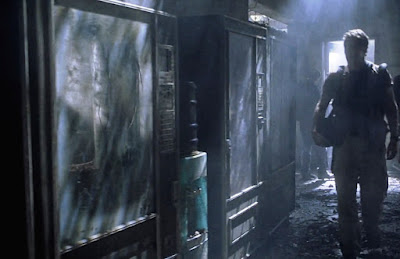 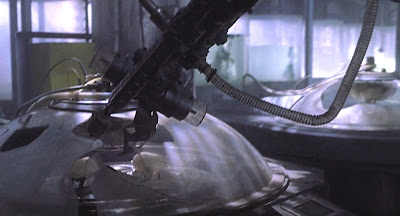 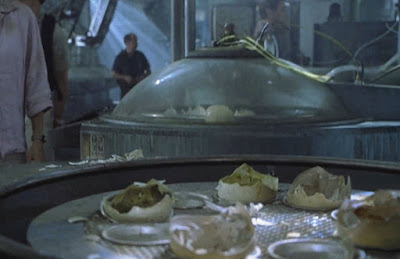 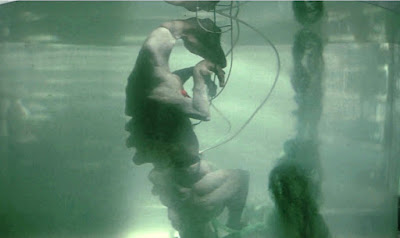 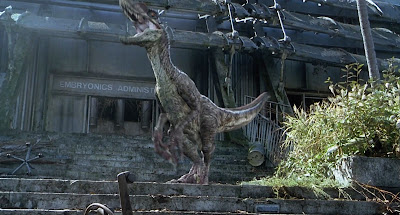 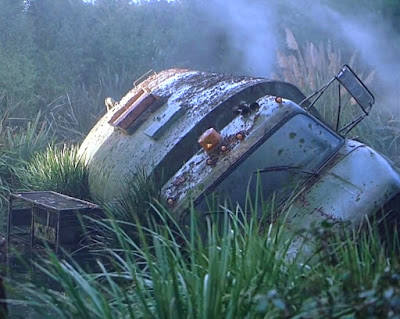 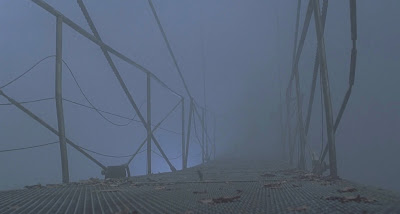 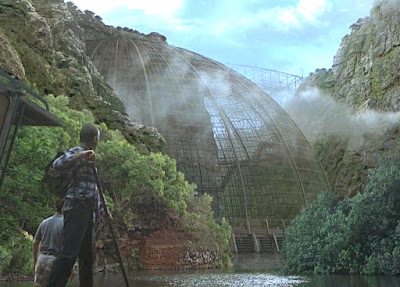 Those ruins!
Those artifacts!
Those mutants!
That wreckage!
That rubble!
That overgrowth!

As Dr. Grant says in the very beginning of the film, "what John Hammond and InGen did at Jurassic Park is create genetically-engineered theme park monsters."

If you can't mine that quote for hours and hours of gamma-gaming goodness, you need to surrender your Mutant Lord credentials.  Hell, I've even done a ton of heavy lifting for you, when it comes to those aforementioned lab-grown critters.

And if you tire of pure beastliness in your antagonists, JPIII's velociraptors make amazing foes.  They're clearly smarter and more linguistic than their relatives in the prior installments, and it wouldn't take much to make them sentient and technological.  (Again, someone else—in this case, Goodman Games—has done the work for you.)

Me?  I'd really irradiate those raptors, and make 'em full-on telepathic, with a full suite of Mental Mutations.

And probably laser-vision, because I loves me some overkill.


The Wrap-Up:  As a movie, Jurassic Park III is definitely flawed, but also innocuously fun.  And it goes by so quickly that it doesn't wear out any welcomes.

But as a source of role-playing ideas?  It's a veritable goldmine.  Definitely one of the most inspirational gaming flicks ever.

Final Review Score:  Three Carnosaur 3 VHS cassettes out of five.  (Though it's probably closer to 2.5, mosasaurus-induced giddiness makes me generous.)