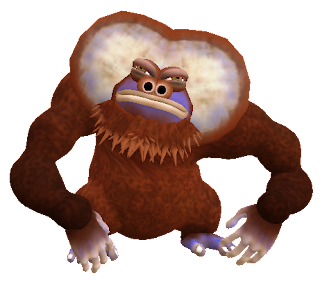 Oranks are strong, shaggy beasts that reach heights of 4'-5' tall and weights of 200-250 pounds.  Their prominent cheek-flaps form a hardened protective frill about their heads and neck.   Arboreal, they spend almost all their time in the treetops of deep forests and jungles, foraging for leaves, fruit, bark, insects, and the occasional egg.

Oranks are relatively docile, but will vigorously defend their territory and young.  When threatened, an orank discharges an obscuring, fetid musk from its frill that forms a 20' radius protective cloud.  This vapor acts as a Class 11 paralytic agent (which induces wracking, debilitating coughs and nausea, instead of paralysis proper), but even a successful Save Versus Poison results in blindness for 1d6+3 rounds.  Oranks are immune to the effects.

They are semi-intelligent, and have been witnessed using makeshift tools. 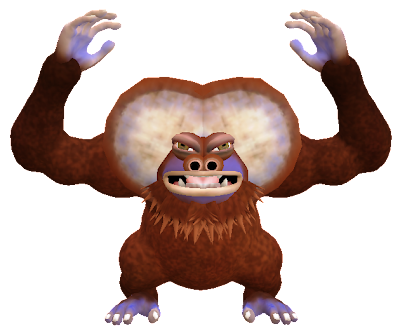