So It's Come To This

Upon reaching 150 mutated menaces and 55 followers, I think a celebration is in order.  And what better way to mark a milestone than with the most hoary and dreaded of TV cliches...the accursed clip show!

That means I'm going to wallow in my own vanity by revisiting my top ten favorite monsters from this here blog.  And I need the ego boost, as Blogger's technical hiccups over the last month deleted 99.9% of the feedback from the Reaction buttons.  (I keep coming thiiiiis close to just removing the functionality entirely, as it's really glitchy, and rather pointless.)

Without further ado and in no particular order, here's my Top Ten Doomsday Mutants:

1.  The Xottles.  These one-off goblins villains have taken on prominent roles in my current campaign.  No one is more surprised than me. 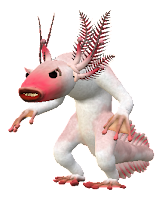 2.  Shatterbirds.  These feel really "Gamma World-y" to me.  (And even I didn't have the moxie to call them "glassowaries".) 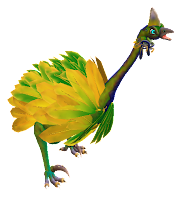 3.  Molebears.  Seeing Jaws at the age of 6 made me obsessed with all things shark as a wee one, and Gamma World's subterranean seps equally captivated and terrified me ("Sharks...IN THE GROUND???!!!" ).  I always wanted to come up with a burrowing critter that did them justice...and if I may be so bold, I think I succeeded.  I'm pleased as punch with these guys. 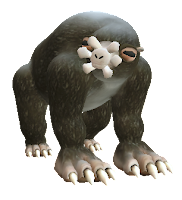 4.  Squalruses.  Shark monsters are hard to pull off, as most have already been done...but I think I'm the first to give them blubber and tusks.

5.  Leafbleeders.  Surly, sanguine, sap-filled, symbiotic sloths.  If those descriptors don't sound awesome to you, we'll never be able to game at the same table. 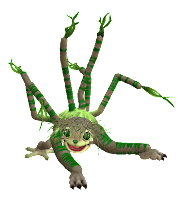 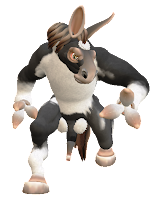 7.  Brainwhales.  At some point in my game, I want armies of these guys rolling over the landscape inside giant, tank-treaded aquariums, and crushing all in their path. 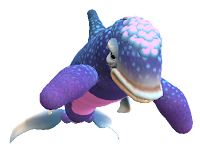 8.  Fizzfiends.  Consuming mass quantities of energy drinks is one of my vices, so I'm rather enamored with these high-caloric creeps.  Besides, "Brawndo golem" is just plain fun to say. 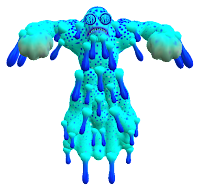 9.  Moonatics.  As the great and powerful Trey said, you never knew you needed 'em until you got 'em. 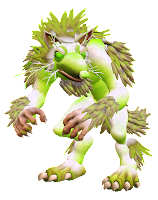 10.  Quarillas.  As a lifelong DC Comics fan, I'm a sucker for monkeys. 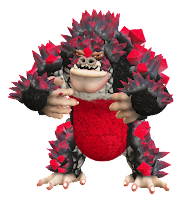 Honorable Mention:  Beebras.  BECAUSE YOU DEMANDED IT!!!  My homages to centisteeds had the highest "Cool" and "Would Use In Your Game" ratings of all my monsters before the Great Blogger Glitches Of June '11.  It would be a disservice not to mention them. 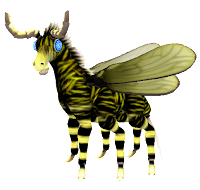 Gamma World 2e—my very first RPG—had 58 unique beasties, and I soundly stomped that number months ago.  And the granddaddy of all monster sourcebooks, the original Monster Manual, had 260.

Thanks for reading, y'all.

Overtoads are a race of sentient amphibians bent on total conquest of the Mutant Future.  They sit 4' tall and weigh up to 300 pounds, and project an aura of confident smugness and dominance (which instills fearful loathing in all who behold them).  They speak all known languages in a gutteral, croaking rasp.

Overtoads have 15' long tongues, and can yank any being of child-size or smaller toward their mouths for a bite attack.  Those hit with an Attack Roll of 20 are Swallowed, taking 1d8 digestion damage per round.

That said, Overtoads abhor physical exertion, and use their bite and/or tongue attacks as matters of last resort.  They prefer to dominate foes with their "Force Of Mind", or use their honed Mental Telekinesis to manipulate Ancient weaponry.  For every 3 Overtoads encountered, they will have in their possession an Advanced Melee Weapon, Advanced Pistol, or Advanced Rifle (determined randomly on p. 107 of the Mutant Future Core Rules).

Overtoads also use their Telekinesis to pilot Ancient vehicles and battle-mechs; some even claim to have seen them at the control of tripods (see p. 100).