Last we left our stank-soaked, dog-less "recovery specialists", Chalur (played by Rob), Frau (Audrey), her guard-panther, and Freya (Alana) stood atop some rusting hulks and furiously scrubbed themselves with the contents of their waterskins.  They'd just vanquished a mob of mega-mawed mustelids, but decided to stay elevated as they aired out, and then bedded down for the evening.  Each took a turn as sentry, but the night was uneventful save for the tiny land-crabs that scuttled up to feast on the critter carcasses.  Circle of life, yo.

In the morning, the trio noticed that their little metallic island was adorned with graffiti.  Such markings are  standard scrounger procedure in my campaign world [just like hobos did in The Times Before], and they recognized the brands unique to their missing colleagues. Clues!

[I think it was at this point that I told the players to each design a tag of their own.  I often assign homework like that, to get people more immersed in the game.]

After breakfast, our heroes slathered themselves in bogbalm (homemade insect repellent) and held a mini-funeral for the dearly departed—albiet nameless!—dog, then tromped Eastward.  Giant bug-things occasionally blotted out the sun, but it was an otherwise uneventful morning.

Early-afternoon, the group made a ghastly discovery:  two semi-fresh, way-too-dry bodies all akimbo.  Vine ligatures still hanging to nearby trees, slit throats, and a distinct lack of pooled blood led the trio to conclude that someone trussed victims upside down, drained them of fluids, and then cut them down.  One of the bodies looked vaguely familiar, like he might be a Gunspoint local.  He also bore a tattoo matching one of the aforementioned graffiti tags.

The group continued on, even more cautiously, for another hour or so.  They eventually heard voices, and stealthing it up like the stealth-fiends they are [can I mention again how annoying it is for 2 PCs with both Chameleon Epidermis and flight...?], came upon a small group of Pure and Mutant Humans in grubby white robes, with reddish-black crucifixes scrawled on the fronts [I think I used the phrase "kinda Klan-y"].  They marched along with two beaten and battered prisoners:  a bird-man with broken wings, and an obvious Android, his metallic skull shining through his extensive injuries.  Oh, snap—their missing colleagues!

The heroes followed close behind, looking for an opening...but then the robed gang entered a curtain of overgrowth.  Chalur tried to scout from above, but the foliage was too thick, so our trio crept into the brush...

...and saw the robe-dudes converge with a few more already camped out in the clearing.  They shoved their prisoners to the ground, and up stepped a big, bad, mutated leader-type, inspecting them.

"This one will make a fine offering," he intoned.  "But this abomination?  It's useless, as its 'lifeblood' is a mockery."  And then leader-guy pulled out a sidearm and blasted off the Android's face...and head...and upper torso.  A metal head rolled into the bushes where the PCs lurked, staring at them in the agonized horror.  Oh, even robots can know fear!

"May we all drink from the Oasis!" the leader bellowed, and the collective answered, "The Oasis is life!"

Outmatched and skeeved-out, Chalur, Frau, and Freya schemed in hushed whispers...and as they did, the cultists opened up Ancient 5-gallon fuel jugs and poured a ring of red liquid around the clearing, and another ring around bird-captive.  Ahhh...so THAT'S where all the blood went from those prior bodies!

Almost immediately, the swamp went silent—bugs, frogs, cultists alike—and our heroes held their collective breath as something rustled in the treetops...

...and then said something...a 5' tall, snuffling, scabrous, sucker-y something, that looked like this...

...dropped down at the far edge of the clearing.  It crawled slowly along the blood circle, sniffing and lapping.  No one moved.

But then a cultist sneezed, and The Thing leapt 30' across the air and pounced on him, ripping his throat out in a geyser of gore.

The cultists froze as the creature noisily dined...and that's when Freya had the brilliant idea to mentally attack the monster with an illusion.  She rolled crazy-high, and implanted the scene in its mind that that all the cultists were talking and coughing and singing and laughing and crying and ruckus-ing at once.

The Thing got really, Really, REALLY agitated, and almost pounced on another cultist...and that's when Freya triggered ANOTHER illusion, this time at Leader-Guy.  She conjured a school of shunks charging right at him [her personal experience with just such an event gave the phantasm that extra soupçon of authenticity]...and rolled a 19.  He shrieked and ran from the clearing.

And that's when, as they say in the vernacular, shit got real.

When all was said and done, there were a ton of dead guys, a few runaways who bolted into the swamp, and one injured surrender-ee.

The heroes surrounded the lone survivor, and Chalur got out, "Perhaps we can get some questions ans—" right before Freya caved in his head.

It was at that point that Chalur mentioned rescuing the bird-guy, but Frau casually, coyly, innocently asked why they even needed to bother.  After all, they had the items they needed, so why not just return home?  They'll be rewarded all the same.  Heck, they could even keep the stuff, and maybe say it got lost in the assorted battles, and just see what happens....

Oh, my dear, sweet, sociopathic Audrey...although you sat down a complete RPG novice, you sure catch on fast.  You're a natural!

Freya seemed to agree, and Chalur was definitely displeased...but the group decided that it was still to early to head back.  The trio decided to visit the foreboding ruins of Woebrook Mall, just because it was so close.  Maybe they'd find bird-guy there, and why miss a chance at another big score...?

They sneaked past a pond of grazing radpoles... 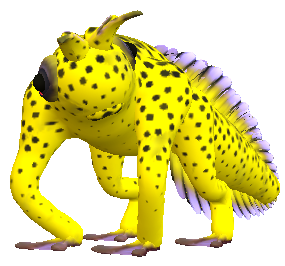 ...and soon stumbled upon the marshy grounds of the ruined shopping center, and ascended as a group (Chalur and Frau carrying the others) to land atop the structure.  Our heroes stared down into the broken skylights, and only the yawning darkness greeted them.... 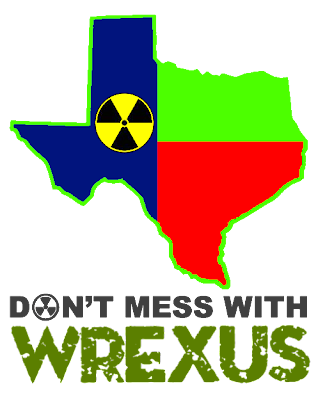 Hugeston, we have a logo. 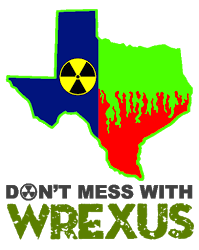