This is for Mr. Alexander Osias.

Bring back any memories, or still a blank?

Email ThisBlogThis!Share to TwitterShare to FacebookShare to Pinterest
Labels: Fun With Feedback 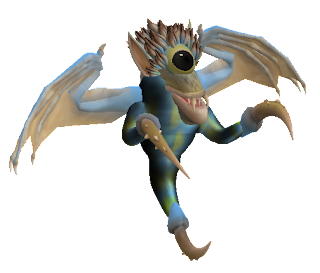 
The cunning obbs are 3' long fungal clusters with spongy bodies and leathery wings.  Each possesses a soulless cyclopean eye and 1d4 scythe-like claws.  Nearly immobile on the ground (AC 9), they are agile and swift when airborne (attaining an AC of 3 in flight).

Obbs are carnivorous, but only devour half of any given kill.  They deposit spores in the uneaten portions, from which sprout 1d6 3 HD "obblings" after a period of 4d6 hours.

Possessed of alien intelligence and logic, obbs have been known to work with other sentient beings for reasons all their own.  And they can be recruited, assuming the PCs can both communicate with them and decipher their inscrutable motivations.... 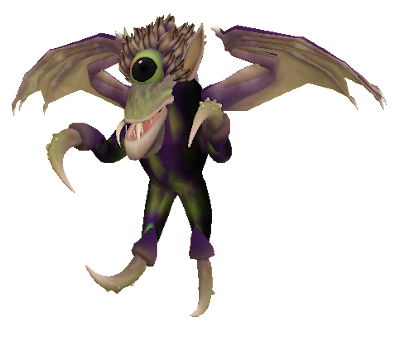 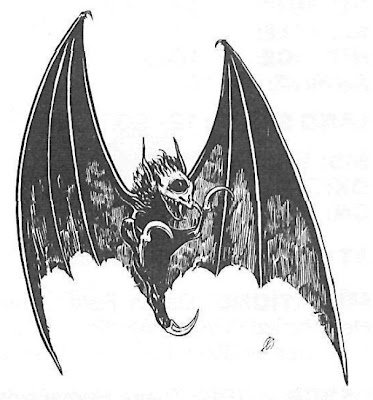 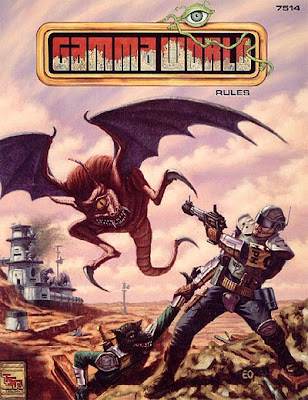 Not-The-Designer's Notes:  The Obb first appeared in 1978 in the 1st edition of Gamma World, by James M. Ward and Gary Jaquet, and again in the 2nd edition of Gamma World from 1983, by Ward, Jaquet, and David James Ritchie.  Illustrations by Larry Elmore from the 2e set, and the cover of 1992's 4th edition by Eric Olsen .  This adaptation combines both the 1e and 2e versions.


Not-The-Designer's Notes Addendum:  Both versions of the obb had the worst Armor Classes (AC 10!) in the entire Gamma World bestiary, yet were compared to hawks for being "deadly-swift in the air".  I tried to reconcile this contradiction.