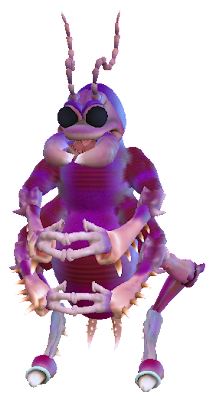 In the Mutant Future, many insectoid organisms behave as their ancestors did in Ancient times—they form colonies, divide the labor according to strict class heirarchies, and communicate and function as if they were one collective entity.  Some specimens, though, mutate and metamorphose beyond the rigid structure of The Hive or The Swarm, and become distinct, sentient, humanoid individuals.  These beings are the Yinsects.

Yinsects are solitary warrior-philosophers that seek to explore the mysteries of both The Self and the world around them, and they wander the ravaged wastelands in search of knowledge in all its forms.  They gladly interact with other sentient beings, and often bring aid and comfort (food, medical supplies, useful Ancient artifacts and tools, brute protection) to isolated communities.  They have been known to join with adventuring parties.

Yinsects abhor violence, yet realize the Mutant Future is frought with danger; consequently, they train their minds and bodies to perfection.  Each Yinsect has an Intelligence and Willpower score of 11+1d8, and they attempt to talk their way out of conflicts...but when words fail, they resort to their mastery of martial combat.  They strive to avoid killing at all costs, and pull their blows to give their foes ample opportunities to yield.  As a last resort, Yinsects will utilize their "nerve pinch" (Parasitic Control) to subdue particularly troublesome opponents.

Valuing autonomy and individuality, they revile slavers and those that oppress the weak.  And valuing life in all its myriad forms, all Yinsects are strict vegetarians.  (They are deeply troubled, though, by the hypocritical implications inherent in the existence of Mutant Plants.)

While each is unique in both appearance and personality, they are generally linked to a particular species.  To determine the "breed" of Yinsect encountered, roll 1d6 on the chart below.  Each type has two additional Physical Mutations common to its kind.  Determine all relevant combat effects by rolling randomly on the appropriate tables. 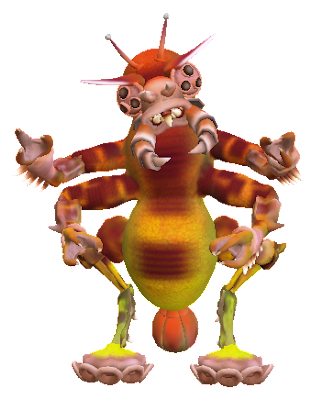