The Guys Of Wrexus Are Upon You — Meet Mattress Mech! 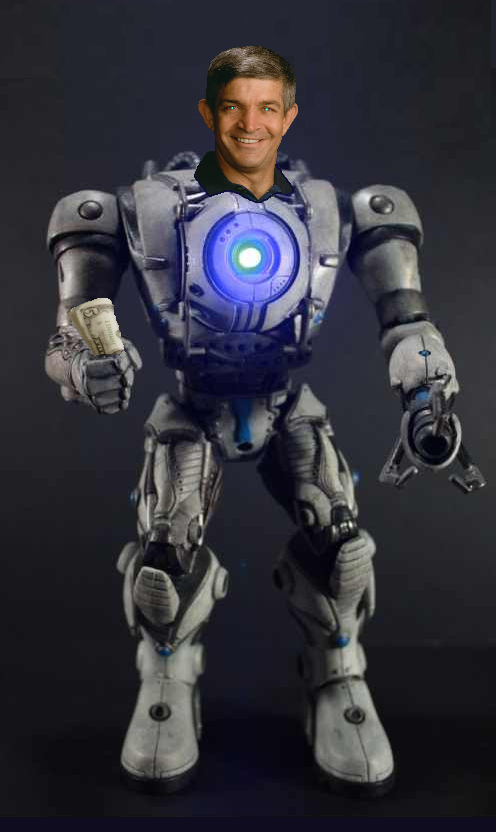 In Ancient times, the Gallery Furniture business empire spread across the planet and The Colonies...and finding human salespeople wholly deficient (due to pesky "empathy" and the capacity to take "no" for an answer), The Powers That Be rolled out an army of unstoppable salesborgs.  These hulking, fission-fueled juggernauts of commerce possessed neural-nets and craggy flesh-faces cloned from company founder, Jim "Mattress Mack" McIngvale.  Sales skyrocketed.

Mattress Mechs strike twice per round with fist (1d12 damage) and claw (2d10), but as the borgs were designed to juggle cumbersome objects with ease, they do 1d12+6d6 damage when attacking with sofas of opportunity.  And the more unhinged specimens have arrays of scavenged, self-installed weaponry....

Mattress Mechs clangorously plod after "customers" at 60' (20'), but hyper-hydraulics allow them to make standing horizontal leaps of 250' / vertical leaps of 100'.

Rumor has it that the original Gallery Furniture site, located mere miles in the doom-bayous south of Gunspoint, has a trove of pristine relics guaranteed to add style. luxury, and comfort to even the most bomb-blasted of bunkers...and the cryo-corpse of Mattress Mack himself!