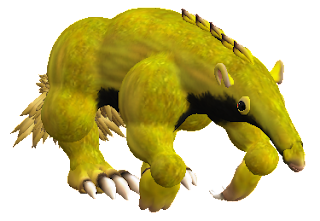 
'Tanteaters (shortened from mutanteater, with the accent on the second syllable) are immense, tawny beasts with bodies the size of Ancient double-decker buses (and lengths twice as long, if you include their tails).  They have insatiable appetites, and stalk the grasslands and forests of the Mutant Future hunting for their favored prey item:  Mutant Humans.

'Tanteaters can detect, within a 5 mile radius, the particular biochemical signatures that set Mutant Humans apart from the other Character Races.  Drawn to large groupings of Mutant Humans, the massive creatures simply lumber into settlements, claw their way through any barricades and walls, and proceed to lap up as many mutants as possible with their sticky, 30' long tongues.

A 'tanteater targets one victim with its tongue, and can catch up to two others (3 total) within the same 10' radius with a successful attack against each target.  Anyone successfully struck with a To Hit roll of 15 or greater is Swallowed.  Those Swallowed suffer 2d10 damage per round until dead, or the 'tanteater is killed.

'Tanteaters have no compunction against devouring the other Character Races; they just don't absorb the same nutritional value from them. 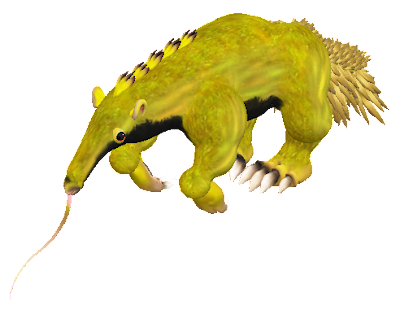